Carol’s Cornwall Road Trip – An Adventure around the South Coast

As Carol travelled, she met some local entrepreneurs and guides, our hosts that make travelling in the UK so special, to experience first-hand these unique, offbeat, local things to do and places to stay.

From beautiful little houses with sweeping sea views, cosy local pubs and stunning seafood spots, to comfortable yurts and secret trails that snake along clifftops and through atmospheric woodland – this was a journey that went to prove that if we travel like a local, domestic holidays can be as compelling and exciting as anywhere in the world.

We began our Cornwall road trip by driving to Looe, a quaint coastal town on the south coast of Cornwall. Here, we met hosts Andrew and Teresa, who had decided to escape the city for the calm, tranquil lifestyle in this secluded part of rural Cornwall.

They provided me and Kenny (my husband) with an incredibly warm and hospitable welcome, taking us on a tour of the beautiful site with its views of the surrounding lush green fields and an air of calm, with its wandering resident chickens, sheep and goats. 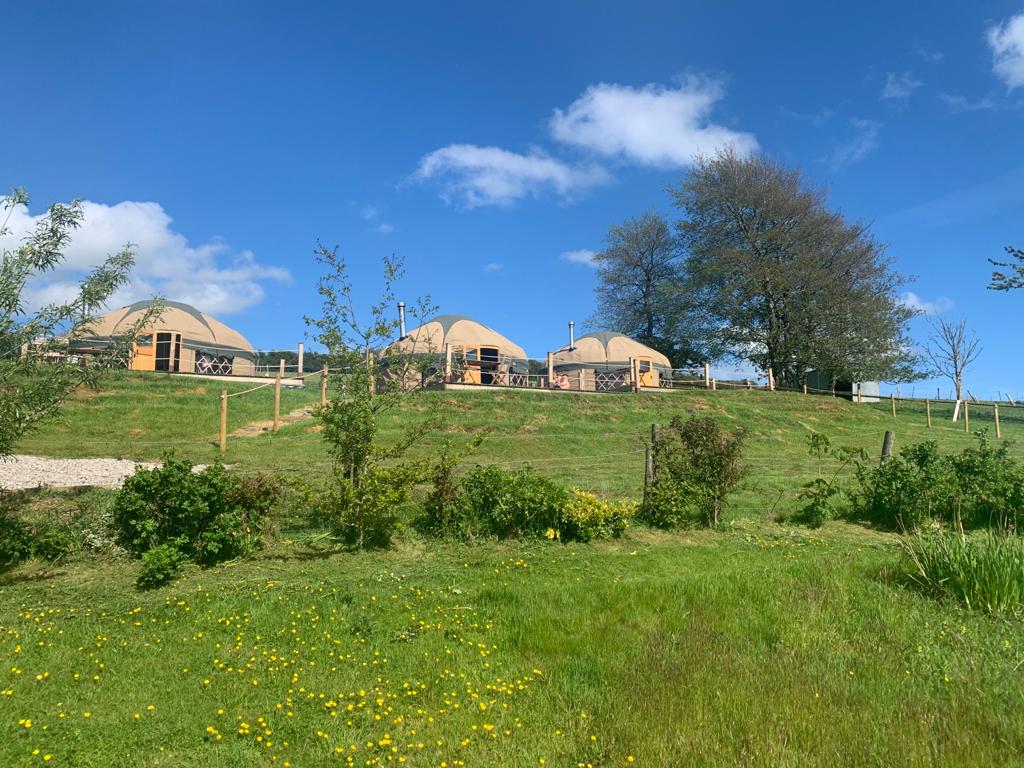 It was evident how much love, care, attention and time had been poured into developing the yurts and the site, and the yurts themselves were top of the range – extremely comfortable, spacious, and equipped with their own log burning stoves.

At the top of the hill on the site we were afforded a gorgeous panoramic view of the Cornish countryside, and it was a peaceful place to sit and soak up the sounds of nature, and watch the buzzards and animals go by.

One of the best features of the yurts was the fact that they were within walking distance of so many amazing parts of Cornwall. Whether we wanted to explore winding coastal paths, the kind of hidden beaches that feel as if they’re totally yours for the day, or the picturesque seaside town of Looe at the end of a spectacular coastal path, all of it was within easy distance.

Kenny and I walked to Looe to see what we could discover, and stumbled across an incredible seafood café and restaurant. Reopened only this April, The Fish Market is served by the working fishing boats that come and moor up right outside the rustic little establishment, cooking this fresh produce simply yet deliciously and serving it up with a great choice of beers, wines, and local ciders.

Fred, the owner, was attentive and friendly, and delighted to show off the incredible range of seafood (of course what was on offer depended on the daily catch) the talented kitchen was churning out.

At the end of the evening, fully satisfied with an exquisite meal, we wandered back along the cliff path to our yurt for the night.

Experiences on this Adventure 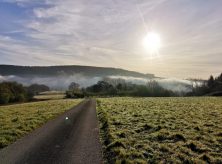 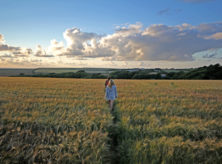 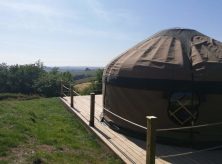 We set off early the next morning on our road trip around Cornwall, heading north towards Bude. The weather had taken somewhat of a turn on this day, and as we drove through the pouring rain it felt like there was only one sensible thing to do – stop off for an afternoon tea.

After searching for somewhere in the town of Falmouth, we found what we were assured was the best spot, as we soon found out… 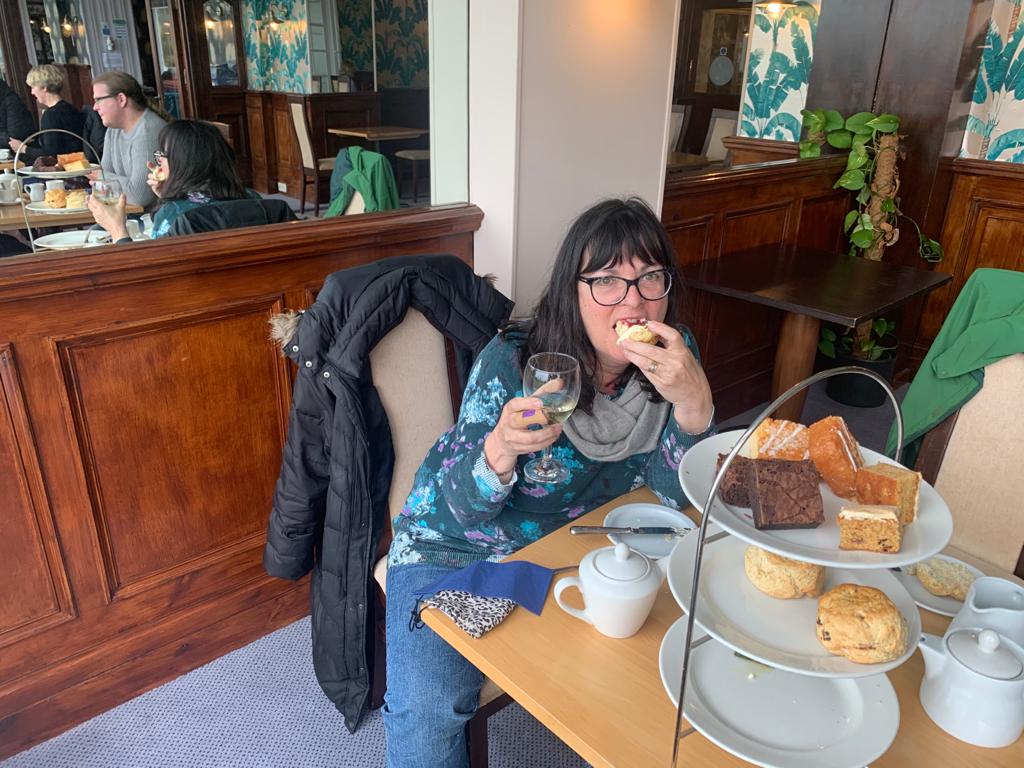 I had personally never realised afternoon tea for two actually equals afternoon tea for four! After a battle through as many cakes and sandwiches as possible, we admitted defeat and took the rest away in a doggy bag, before continuing up to the north coast.

We arrived at our tiny house accommodation in the early evening to receive yet another warm welcome from David and Maisee. Settling in and lighting the log burner, we chatted to the pair on the decking of the house, overlooking sea views down at the end of a lush valley. Once we were settled in we headed to a local pub for dinner, the kind of pub where everyone knows each other and really feels like a locals local.

The next day we were up early as David, who lives on the farm next door, came knocking to show us some of the best hiking the area has to offer. Walking straight out the front door, we set off across the valley to a forest, then heading on the coast.

It was immediately clear how useful it was having David, a true local who had grown up in the area, as a guide. Taking us on paths his parents had taken him on when he was small, we discovered routes and trails we would never have found ourselves – little shortcuts through atmospheric woodland and over bubbling streams, or diversions off the main tracks to amazing panoramic views of the sea. 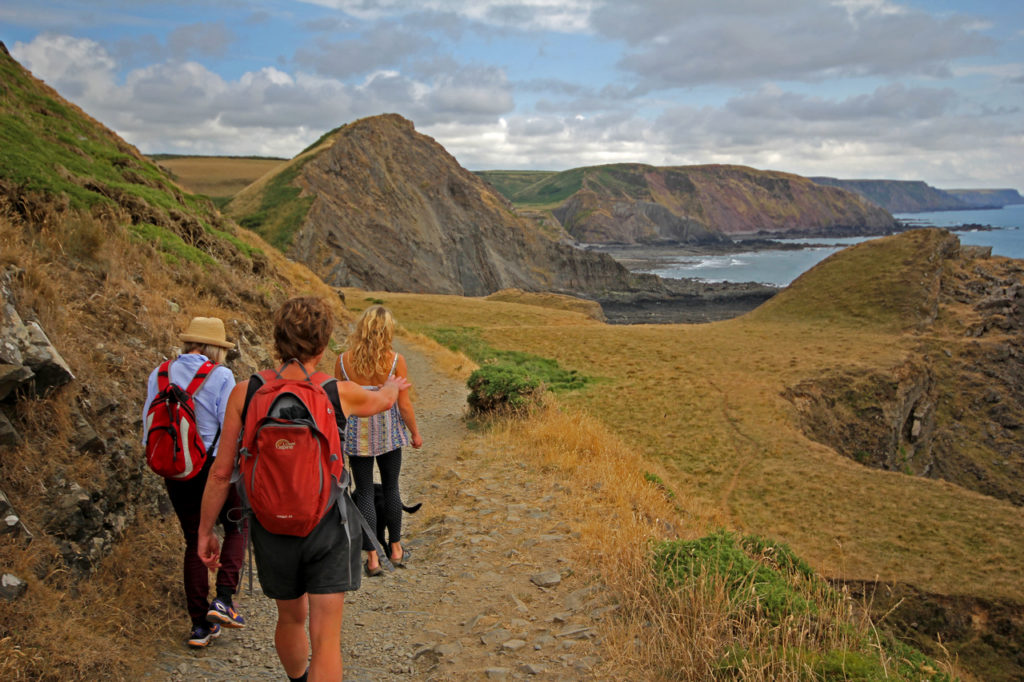 As we continued to a headland, David brought the landscape to life with stories of shipwrecks, in an area renowned for being particularly treacherous in the 1800s. Thanks to David we discovered the unique little hidden gems.

For example, we stumbled across a small hut built into the side of a sea cliff, which in itself was intriguing, but if we’d been alone we would never have known its origins or the story behind it.

Built by an eccentric local vicar called Robert Hawking, he built it using the wood of the wreck of the Caledonia, a famous shipwreck. He would sit in this cabin and keep watch for other vessels caught in bad weather and help them if possible, which would have been a good idea considering there have been over 300 shipwrecks since records began in the late 1700s.

After a bracing day out in nature, drinking in views of dramatically plunging sea cliffs and hearing all kinds of fascinating stories of the landscape, we headed back to the pretty little town of Bude for dinner, and then our tiny house accommodation for the night.

Despite concerns that I’d be bumping my head every two minutes, it was actually surprisingly spacious, and the bed in the roof of the house was extremely comfortable, making for a very good night’s sleep and energising us for the next day’s adventures.

E-Bike Adventures and Escapes to Nature 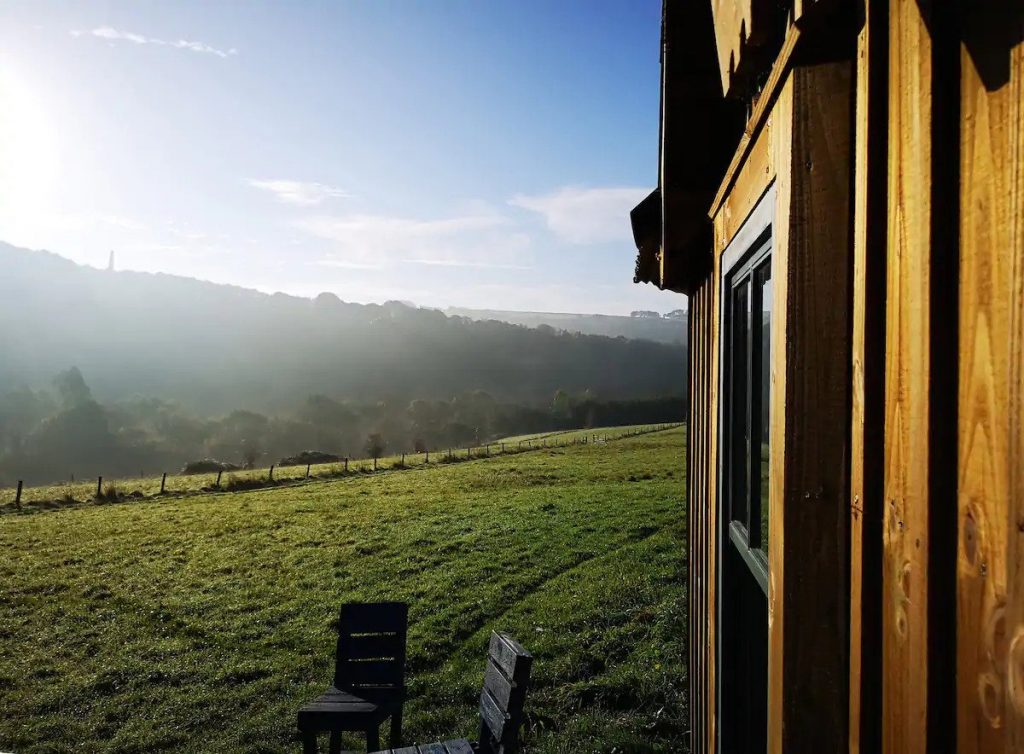 The next day kicked off with my very first time on an e-bike. We set off on a ride, led again by David, around the beautifully quiet lanes around Tamar Lake, before stopping off at an incredible little museum, the sort of place you would never find on your own.

It had been created by David’s dad, and he had painstakingly filled it with models and paintings of some 250 shipwrecks caused by the wild weather of the coast, the prevailing winds and the unforgiving cliffs.

After enjoying this hidden gem in the Cornish backcountry, we waved goodbye to David and set off for our last stop on our tour around Cornwall, Harewood Farm.

At this secluded and well-cared-for farm, we met Jo and Lily, for a day of immersing ourselves in nature to achieve that sense of really getting away from it all. We were taken to the polytunnel and beautifully tended vegetable gardens on the farm, where our hosts were growing a huge variety of fresh produce. 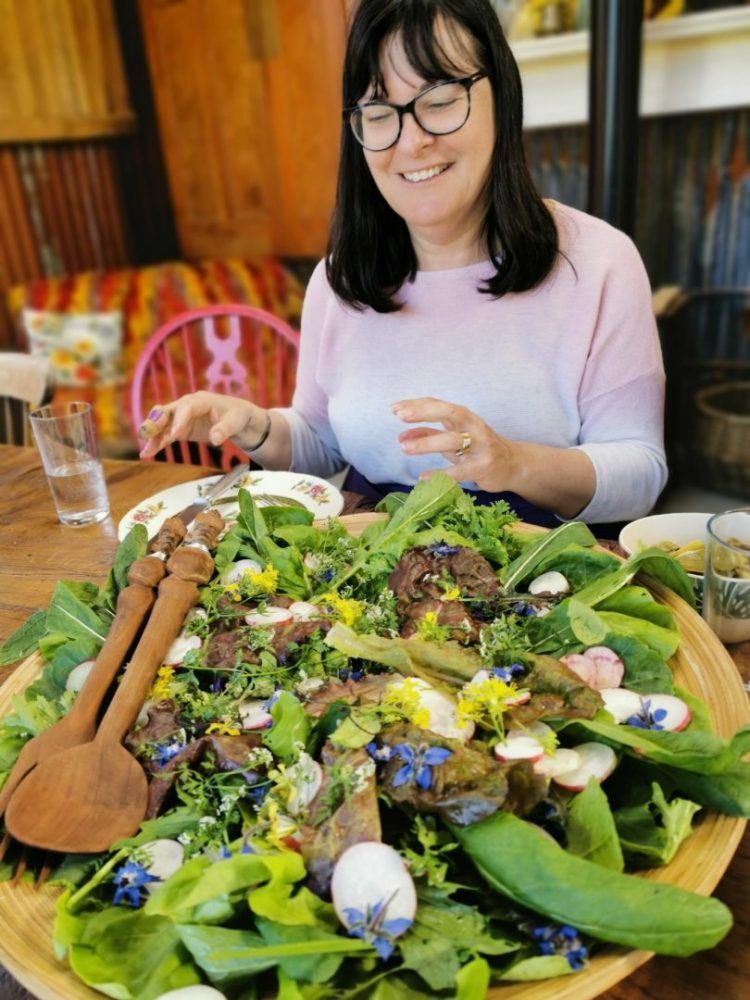 After a tour through the quiet, peaceful woodland and a wander around the rest of the farm, we spent the rest of the day relaxing at the cabin prepared for us by our hosts.

Totally off-grid, it was the perfect place to just unwind after a busy few days, and make the most of the indoor/outdoor shower immersed in nature. When you were quiet, the only sounds were those of the birds, hitting home just how far from civilisation we were.

The next morning we wandered across the wild meadows, where Jo and Lily had prepared us homemade muesli and yoghurt for breakfast to finish a beautifully restful experience.

Unfortunately, the time had come to say goodbye to our hosts, and to Cornwall, but after exploring this stunning corner of the UK on a truly off-grid holiday in the UK, we left assured in the knowledge that if you travel like a local, with the locals, you will create the kind of priceless memories and experiences you will take home and treasure forever. 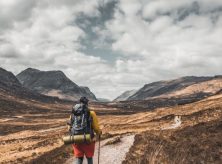 Off Grid Holiday Ideas in the UK 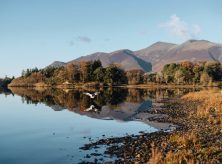 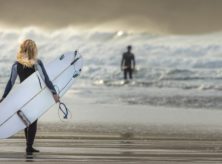 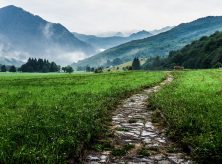