Northern Vietnam has always represented that slightly remote, more rugged side to what is now a hugely popular tourist destination. A truly immersive tour of northern Vietnam isn’t always easy to come by however, the region being more isolated and less easy to travel through than the south of the country.

So it was with a sense of real anticipation that we stepped onto our minibus at 6 am, with a drive deep into Vietnam’s ‘wild west’ awaiting us.

The 5-hour drive might have seemed daunting, had it not been split up by the kind of resting points that certainly topped your Knutsford Services. The first was a remote village nestled in the rice paddies and lush countryside; it was our first real glimpse of the world beyond the Hanoi’s urban sprawl.

Mr. Long, our guide for the three days, gave us a whistle-stop tour of rural life, and despite being only a short way from the buzzing capital, it felt as though we had stepped off our bus into another century. We were shown various exotic native plants, the fruits and vegetables grown by the community, Mr. Long explained how the landscape and the rice paddies were shaped, about the various insects and butterflies…

There was nothing he wasn’t happy to enlighten us about. It provided an invaluable insight that allowed us to really understand what we were seeing, and not simply observe what were, in all fairness, idyllic surroundings, captivating as they were.

Our second stop consisted of a lunch served with typical Vietnamese enthusiasm, as steaming plates of sharing dishes were brought out to us. Traditional, authentic Vietnamese food has to be one of the best cuisines on the planet, and Mr. Long was wasting no time explaining each individual dish and how it was made, why it was a speciality of the region, and so on.

Just around the corner from the local restaurant stood a Buddhist Monastery, a heavy scent of incense and air of spirituality hanging above it. Mr. Long told us how the monastery worked with the community and the significance it holds for the locals, and helped us understand what actually went on inside, running us through some of the various rituals that took place there.

As we continued on our drive through the stunning mountain countryside, each corner revealing a view even more captivating than the last, we pulled up in a cloud of dust at a dilapidated yet imposing fortress.

Dong Khe was, in fact, instrumental in Vietnam surviving invasion during the First Indochina war, and has a fascinating story we would have been totally oblivious to, had Mr. Long not enlightened us.

In a whirlwind of enthusiasm, we were whisked off to the ornately decorated Mother’s Temple before suddenly finding ourselves, a little dazed and tired, in a beautiful village at our local homestay. After what had been a long day of driving, learning and exploring on day one of our immersive tour of Northern Vietnam, it came as sweet relief to wander through lush green paddy fields to our traditional but immaculately comfortable stilted house. 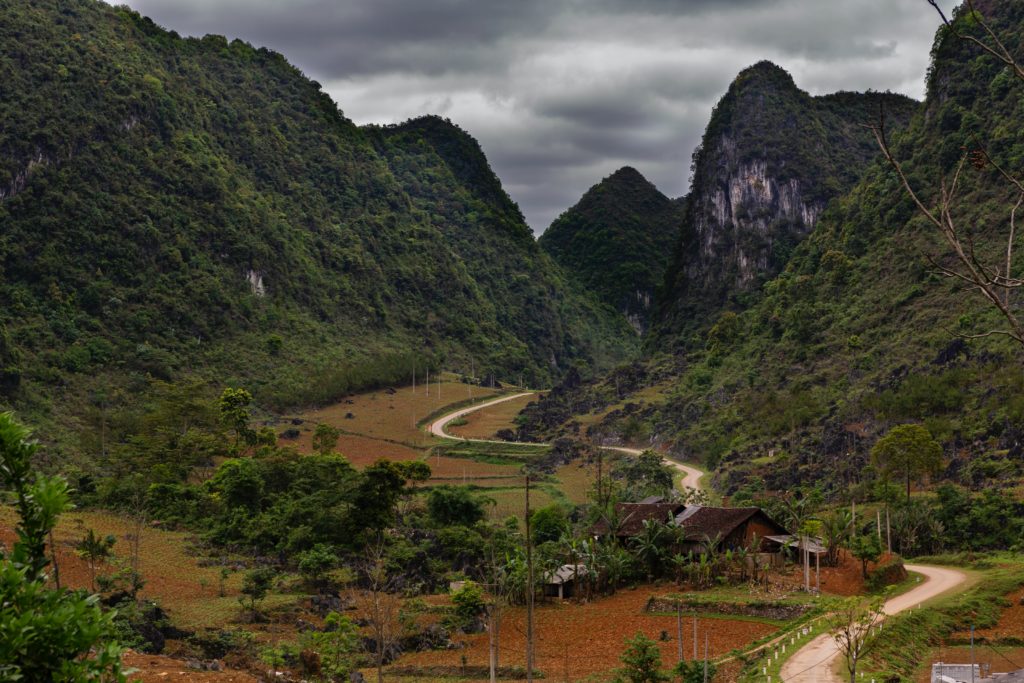 Our hosts for the night, Mr and Mrs Nung, laid on an enormous, exquisite dinner of carp caught from the nearby lake, homemade vegetarian spring rolls, noodle dishes and, dangerously, free-flowing rice wine.

They introduced us to the customs of eating and drinking the right way, ensuring we could eat like locals. For example, a shake of the hand apparently equals a shot of rice wine. It seemed Mr Nung was fairly set on getting well acquainted with us all that night.

This was a unique opportunity for us to get an insight into the lives of people who actually live and work in a small hamlet in the remote countryside, which just added to the sense that this was a genuinely immersive tour of northern Vietnam. We discussed the culture of the area, their farming, their ways of life, until finally, exhausted and hugely satisfied a heady mixture of food, conversation and rice wine, we went to bed.

We awoke early, to the sun slowly drifting into our room and the sounds of a rural community, cockerels and all, stirring into life.

After a breakfast typical of our host’s eagerness to please, pancakes not the first thing we expected in a remote Vietnamese outpost, we set off early in the cool, fresh morning air.

Our first stop was Phuoc Sen, a village deep in the mountains near the Chinese border. If anywhere on our trip was the epitome of a transportation to another time, this was it.

Mr. Long took us through the village to a traditional working blacksmith, where we stood and observed as three blacksmiths went about their daily routines.

As they worked in a blur of melting, heating, hammering and steaming, Mr. Long explained the importance of the blacksmith to the community. The very farm tools with which the vast majority of the community made their living, cutting terraces, planting crops, tilling soil, were crafted in this very spot.

It hits home just how far we are from Hanoi at this point. This village is a different world that you’d have to be unbelievably lucky and bold to stumble across. Thanks to Mr. Long, we were getting an intimate experience, an immersive tour of northern Vietnam that directly exposed us to authentic, traditional culture and ways of living, all in some of the most remote regions in the country.

We left them to their work, and set off for the spectacular Ban Gioc waterfall. Spanning over 300m and dropping 30m, this torrent of white water cascading out the deep green jungle, between shimmering rice paddies is a genuinely awe-inspiring sight. 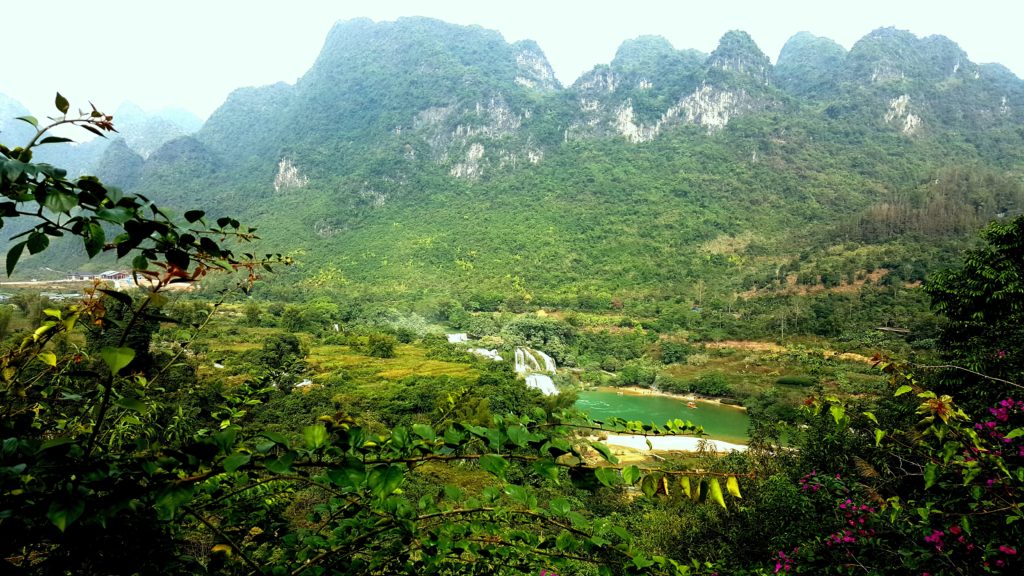 We took some time to drink the spectacle in, hiking up to this incredible natural border with China, before we set off on a boat for the plunge pool. Gazing up at the power of the falls, the cool, fine spray rising in a mist around us, we floated to a small island near the foot of the falls, where we were given time to explore.

And we weren’t finished with the natural wonders.

The image of Ban Gioc still vivid, we were shown Nguom Ngao Cave. A country blessed with amazing cave systems, including the largest cave on earth, Nguom Ngao is certainly one of the most spectacular.

Extending for miles into the heart of the mountains, the system is blessed with a forest of intricate formations, delicate stalagmites and colossal stalactites. As you would expect, Mr. Long wasn’t short on information for us here.

He picked out lotus flowers and showed us how to extract their seeds, led us to the beautifully intricate crystal tree, explained to us that the name of the cave originated from the supposed sound of a tiger’s roar from within the cave, and ensured that throughout our exploration of Nguom Ngao, there was no question left unanswered.

We emerged from the cave halfway up an enormous cliff face, which offered yet more incredible views.

We made our way to Cao Bang, the town where we were staying for the night, situated on the edge of Ba Be Lake. A swim in Ba Be is hugely rejuvenating. Old, rickety water wheels slowly turn on the banks, and as the sun dips and cools the colour of Vietnam’s largest lake turns from an iridescent blue to a shimmering hue of deep oranges and vivid pinks. 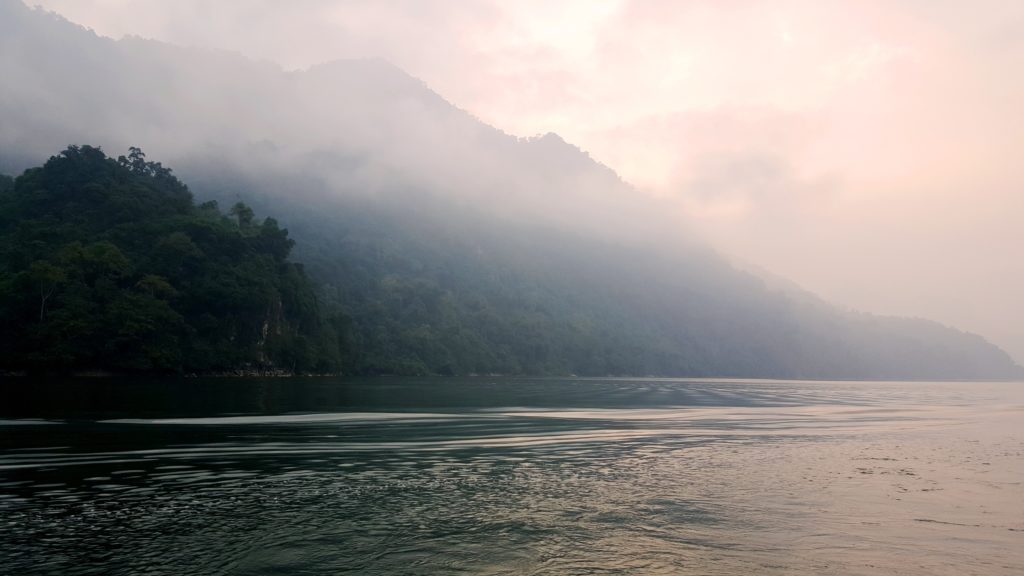 A moment of reflection and relaxation, we soak in the tranquil atmosphere, before heading back to yet another beautiful homestay. After another dinner of fish, spring rolls, vegetables, noodles, soups and, of course, rice wine, courtesy of our incredibly generous family of hosts, we settle in for an evening of cards, beers, and a reflection on what has been a surreal couple of days.

It has been surreal in the sense that we immersed ourselves in a culture that is so far removed from our normal lives, and provided with such insight from Mr. Long, that it feels as if it should have taken weeks of exploration and endeavour to get to this point. The guidance of Mr. Long and the welcoming nature of our respective hosts however, made the entire experience almost so easy that it felt dreamlike.

On the final morning of our three days in northern Vietnam, we are up early again to catch the sunrise over the lake. We’re shown to a couple of kayaks where we spend an hour paddling about the lake under the vast expanse of clearing sky, as the sun began to burn the clouds from the horizon.

After freshening up and reluctantly dragging ourselves from the homestay, we boarded a small boat, and drifted upriver, surrounded on all sides by lush vegetation and the endless sheer mountains springing up from the terraces and rice paddies.

A dreamy three hours up this quiet river, the sun offering beautiful warmth and the scenery just not letting up in its attempts to impress us, proved an incredibly relaxing way to start the last of our three-day tour.

We floated down caves, into small secret corners known only to those who worked on this river and had an intimate knowledge of it.

Our last stop, after another drive, was to a tea plantation. We were given an in-depth tour, shown the nuances of tea growing and harvesting, green tea leaves are at the top of the plants kids, and treated to some of the freshest tea you will ever taste.

Finally, it was back to Hanoi. The three days gone in a blur, we’d more than scratched the surface on our immersive tour of northern Vietnam.

We’d seen the sights, learned the stories, understood the lives and been truly immersed in Vietnamese culture thanks to Mr. Long and his impeccable guidance. The sights had, of course, been incredible, but the real highlights were the people we’d met and the exposure to a culture so far removed from our own, which made it an entirely unforgettable experience.