Home » Archives for Niall and Poul 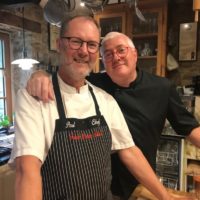 About Niall and Poul

Your hosts are Chef Poul (from Denmark) and Niall (from Ireland).

Poul has gained invaluable experience at some of the world’s most esteemed restaurants including Longueville Manor (Jersey Channel Islands), Mietta’s Restaurant of Melbourne (Australia) and the world renowned liner the QE2. In London, Poul worked for Noble Rot (Mayfair) and The Walbrook Club (City of London) with Albert Roux. Poul has also run his own restaurant in Denmark (Ebeltoft) for 8 years and gained widespread recognition for his cuisine.

Poul’s style of teaching is relaxed and fun but given his restaurant background, there’s also a strong emphasis on presenting food to restaurant standards to impress your friends. Poul will teach you how to cook with confidence passing on his cooking expertise as well as taking you on a culinary journey of local French dishes and ingredients.

Niall was brought up on a dairy farm in Ireland. His family was completely self sufficient, making all their own butter, cheeses, sausages, chutney, jams, cakes and breads. At an early age he was baking cakes, making soups and jams, churning butter and collecting sorrel from the hedgerows! He is particularly interested in nutrition for healthy living and food safety.

He developed the ‘Kerrouet Royale’ – a world class cocktail which is named after the local village were they are based. Niall loves exploring old recipes and developing new ones; he launched a new dessert, rosehip posset, using wild rose hips. He can also advise you on great walking and cycling trails in the area and invites students to explore places of interest.

Activities By Niall and Poul 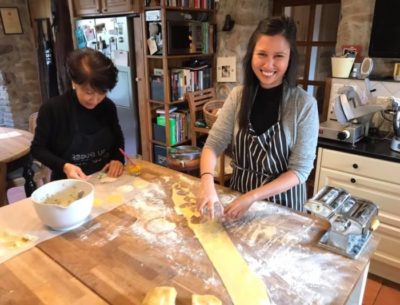 Explore
We use cookies to ensure that we give you the best experience on our website. If you continue to use this site we will assume that you are happy with it.OkPrivacy policy