Home » Blog » What to Eat at French Christmas Markets

What to Eat at French Christmas Markets

When you arrive at a picturesque French town at Christmas time, the first thing you’ll notice is the baffling array of different scents wafting from seemingly endless varieties of stalls, leaving you overwhelmed when deciding what to eat at French Christmas markets.

Whether you’re on a Christmas market break in Strasbourg, in Reims, or in Champagne, you can be certain that there is no end of wonderful local produce and unique Christmas specialties on offer at the little wooden chalets packed into a snowy square.

And as we’re just starting the run-up to Christmas, we thought this would be a good time to tell you what to eat at French Christmas markets in these very cities that we run Christmas market breaks too, so that you don’t miss out on any local specialties we would describe as unmissable. 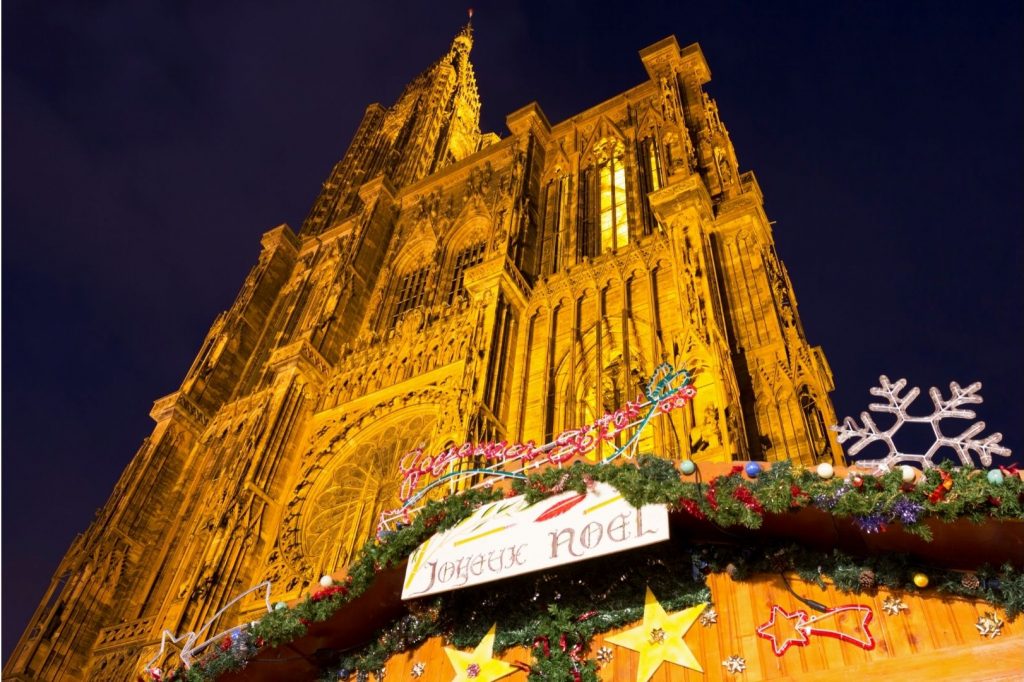 Strasbourg sits in the heart of the Alsace region, just a stone’s throw to the border with Germany. For this reason, you’ll notice a distinct German twist to all the food you find in a Christmas market in Strasbourg.

At one of the oldest Christmas markets in Europe, you’ll find the locals putting on a spread of German-French cuisine you won’t find anywhere else in the world, making Strasbourg an incredible, unique destination for a Christmas market break.

As well as the locals’ passion for Christmas market food, it’s this hybrid cuisine that draws visitors from all over the world, thanks to treats like these. 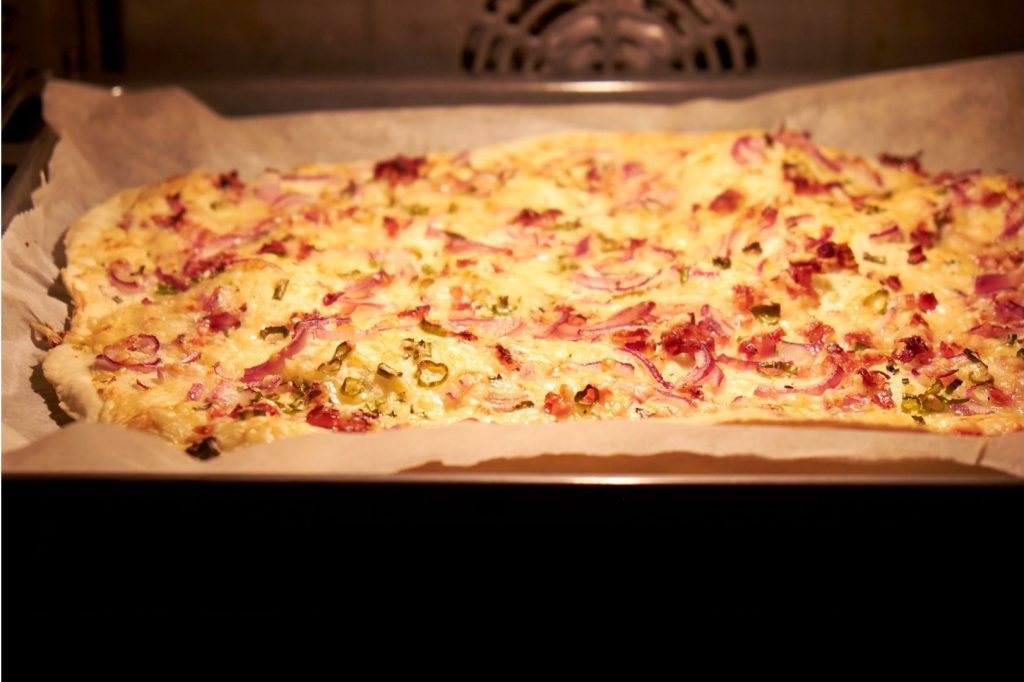 This absolute staple of Alsatian cuisine should be your first stop when you’re looking for what to eat at a French Christmas market in Strasbourg. Essentially the French answer to pizza, a Tarte Flambée differs from the legendary Italian cousin by being crispier, and generally thinner, as well as being far less popular around the world – not that we can see why.

It’s made by topping thin, pizza-like dough with crème fraiche, bacon lardons, Emmental cheese and onions, before being baked into a delicious, crisp, and flavoursome Alsatian snack you’ll find irresistible. 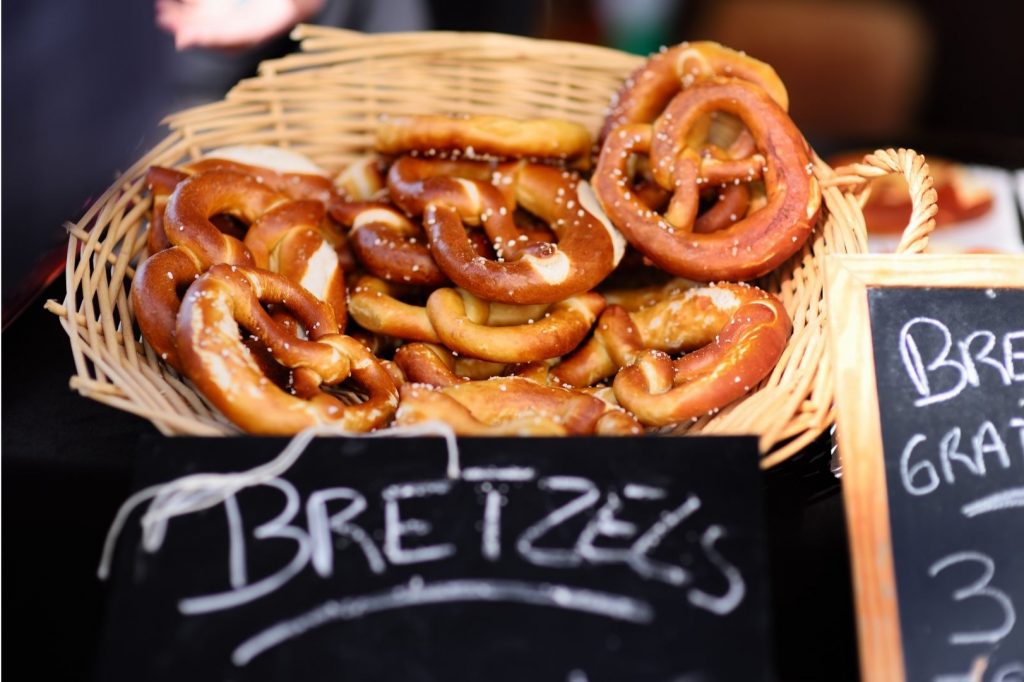 A result of the German influence just over the border, don’t adjust your set, a bretzel is not a typo, but a classic example of the Alsatian cuisine found when you’re wandering the Christmas market at Strasbourg, wondering what to eat.

Essentially, a bretzel is what you might know as a pretzel, a soft, knotted bread-like dough snack, sold in their thousands in the Alsace region at Christmas. Topped with cheese or butter and served hot, they’re the perfect snack for strolling through the snow and Christmas lights. 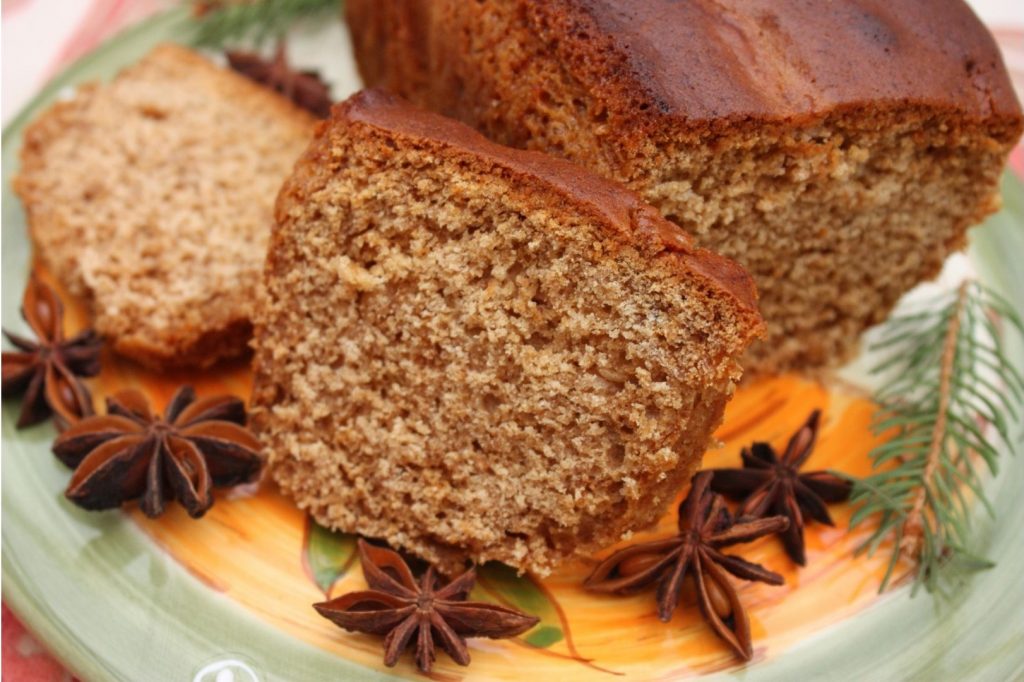 This French spiced bread is a traditional food that dates back over 350 years, to the very region that Strasbourg sits in. Made with rye flour, honey, and spices such as cloves, nutmeg and cinnamon, this sweet loaf has all the tastes and scents of Christmas, and is quintessential to the region.

You’ll find it at any number of boulangeries and Christmas market stalls in Strasbourg, and in our eyes, if you miss out on this comforting snack, you’re missing out on a piece of true Alsatian heritage and Christmas cuisine. 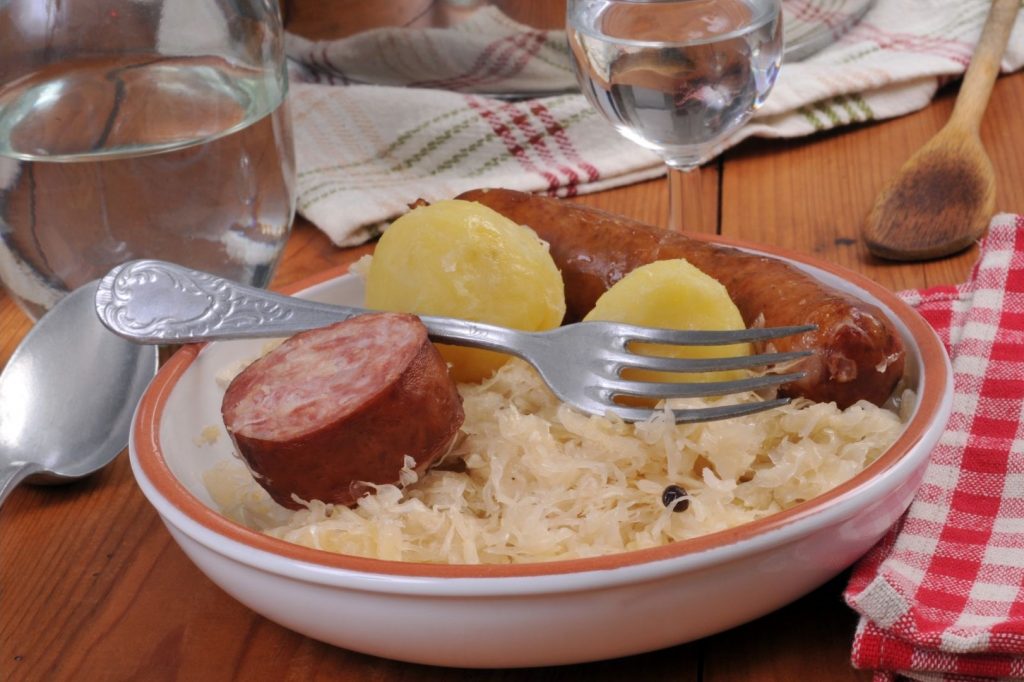 Another dish that belies the German influence on what to eat at this particular French Christmas market, Choucroute garnie finds its roots in the 17th century, and is a very much Alsatian way of cooking the eastern European and German ingredient of sauerkraut.

To create the warming, homely dish, the sauerkraut or cabbage is cooked in white wine, most often Riesling, along with traditional sausages, charcuterie and other salted meats. Trust us when we say you’ll be able to smell this succulent dish from a mile off, and it forms the perfect partnership with… 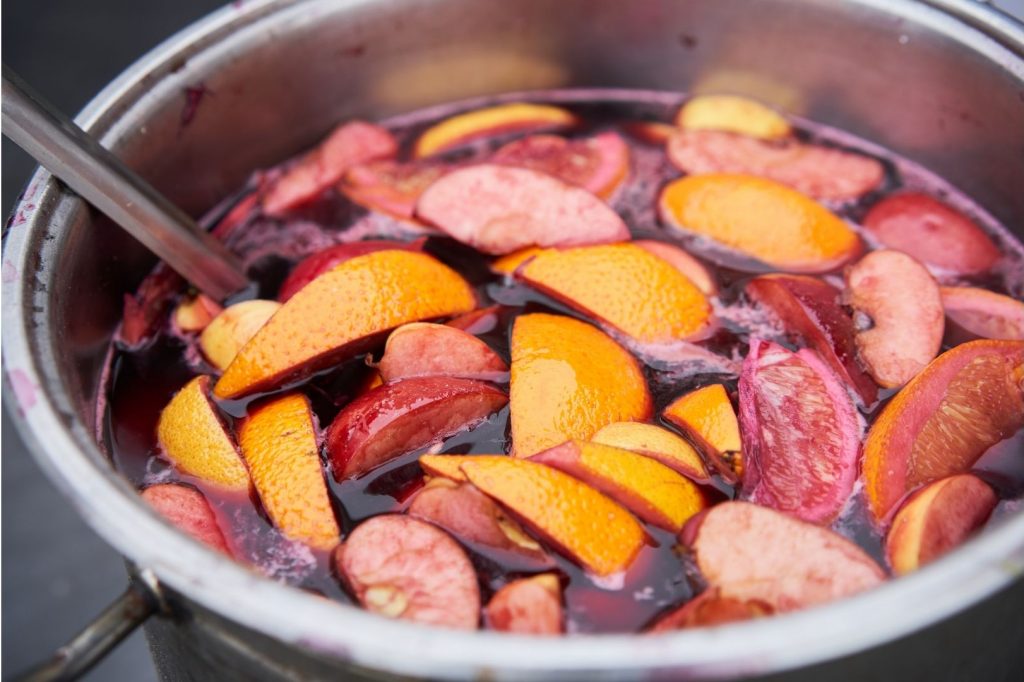 We all know what a Christmas treat mulled red wine is. Hot red wine with cloves, star anise, cinnamon, and many other variations of spice create a scent and a taste absolutely synonymous with Christmas, and a cup as you wander a beautifully lit, crisp, cold Christmas market can hardly be beaten.

But when you’re in Strasbourg, it’s well worth branching out to something you won’t find in as many places around Europe. Mulled white wine is generally made with dry white wines and similar spices, and the scent of a mulled cider with a big dish of Choucroute garnie? Perfection. 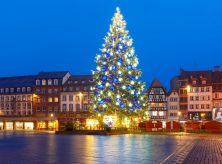 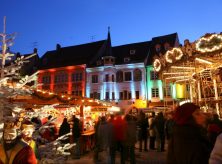 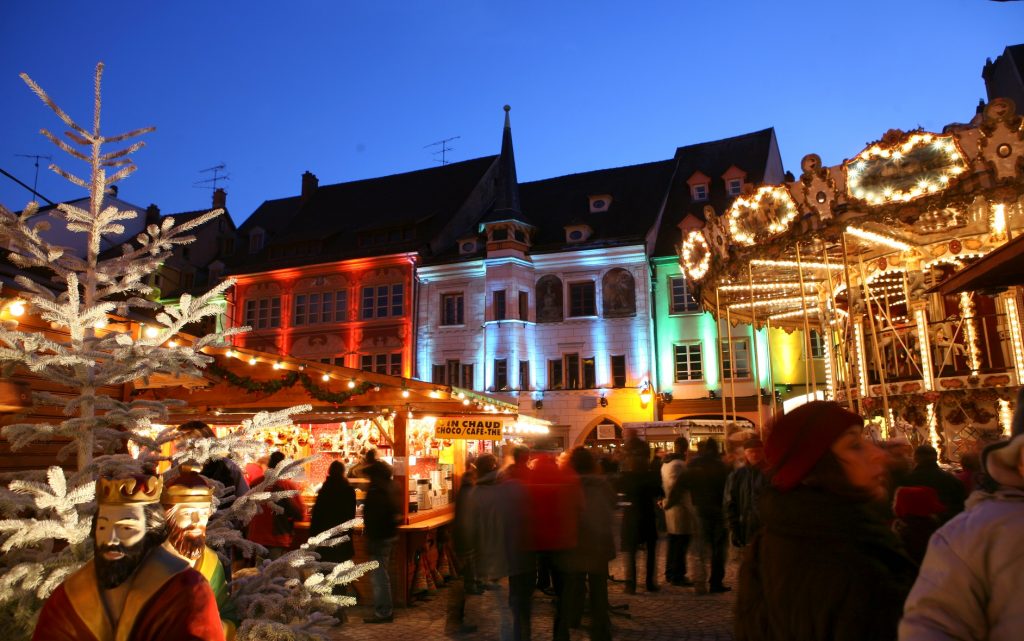 Reims is the largest city in the region of Champagne, so no prizes for guessing what that area is famous for. Underneath the beautifully lit cathedral, 125 stalls glimmer with lights and offer up a huge variety of artisanal crafts, food and drink.

It’s no wonder visitors here are stuck wondering what to eat at this most aesthetically pleasing of French Christmas markets, so here are a few regional ‘must-tries’ to help you get the very best of Champagne cuisine. 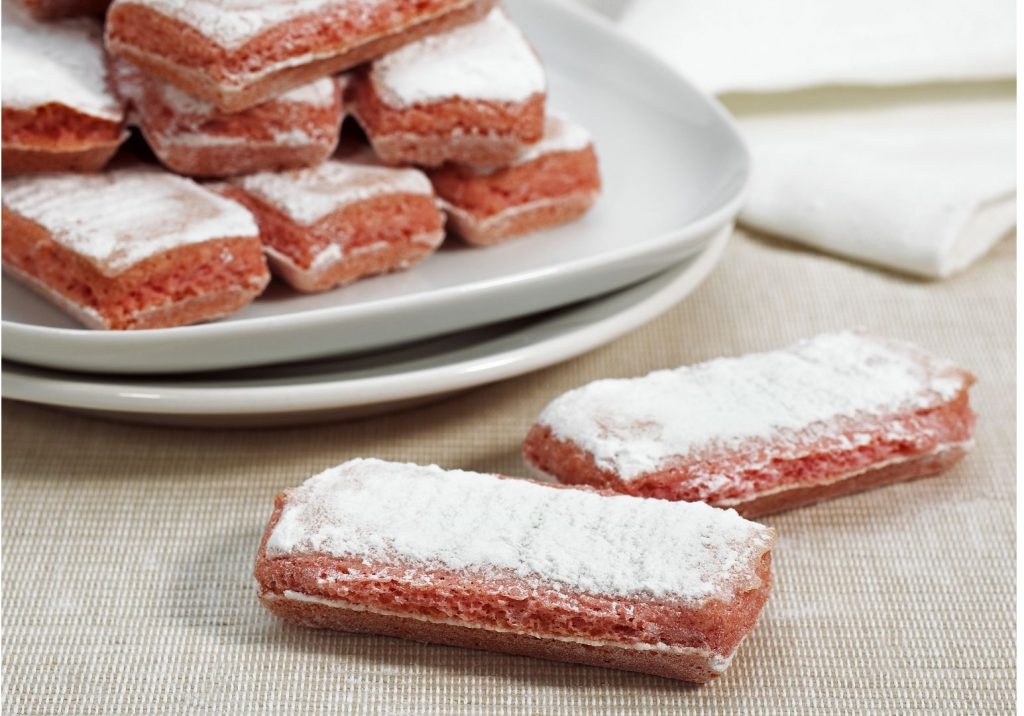 If there was a single food that could symbolise the French city of Reims, it would probably be this biscuit dating back to the 1690s. A favourite snack of historical figures like Leopold II of Belgium and King Charles X, you’ll easily be able to find some of these pink, oblong biscuits as you explore Reims Christmas market.

And as you’re in the unofficial capital of Champagne, it almost feels rude not to dip your classic piece of French cuisine into a glass of the bubbly stuff, a practice that is both traditional, and brings out the flavour of the biscuit. 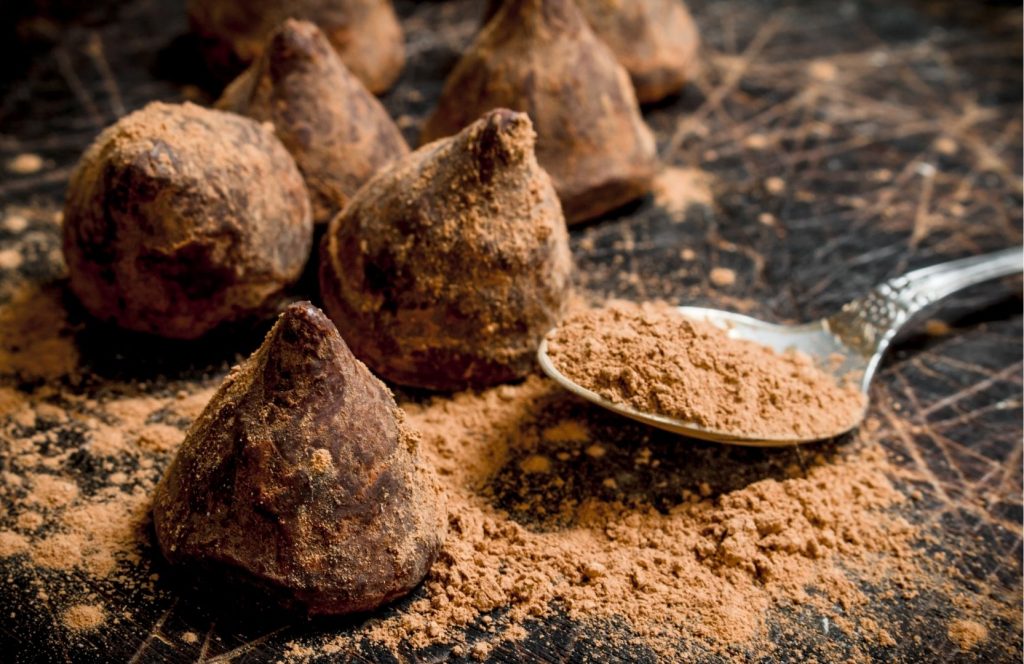 The French certainly do a lot of food very well indeed. Cheese, bread, pastries, and right up there at the top of the pile is chocolate. And nothing quite beats the luxury of a chocolate truffle with a glass of Champagne as you explore the beautiful main square.

As Reims is one of the homes of truffles, they’re a treat you really shouldn’t miss if you’re going to pay a visit to a corner of the world that just screams indulgence at every turn. Speaking of indulgence, there is one staple of Reims cuisine we’ve mentioned a few times already, without it getting its own section. 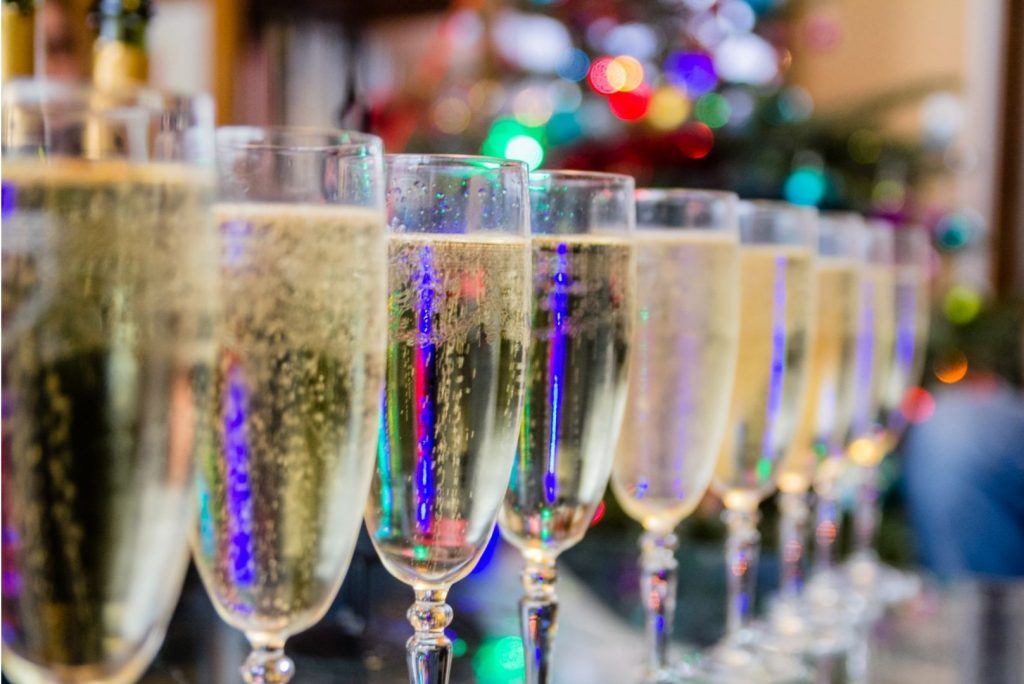 You can’t visit the Champagne region of France without tasting as many varieties as you (responsibly) can. And what goes together better than Champagne and Christmas? After all, it is a time of year to enjoy all the good stuff in life.

And with the oldest Champagne house in the world just round the corner and the most prestigious makers of Champagne in the world right there in the region, it can often be a good idea to head out beyond the market and take a deep dive into the countryside that produces this global phenomenon. 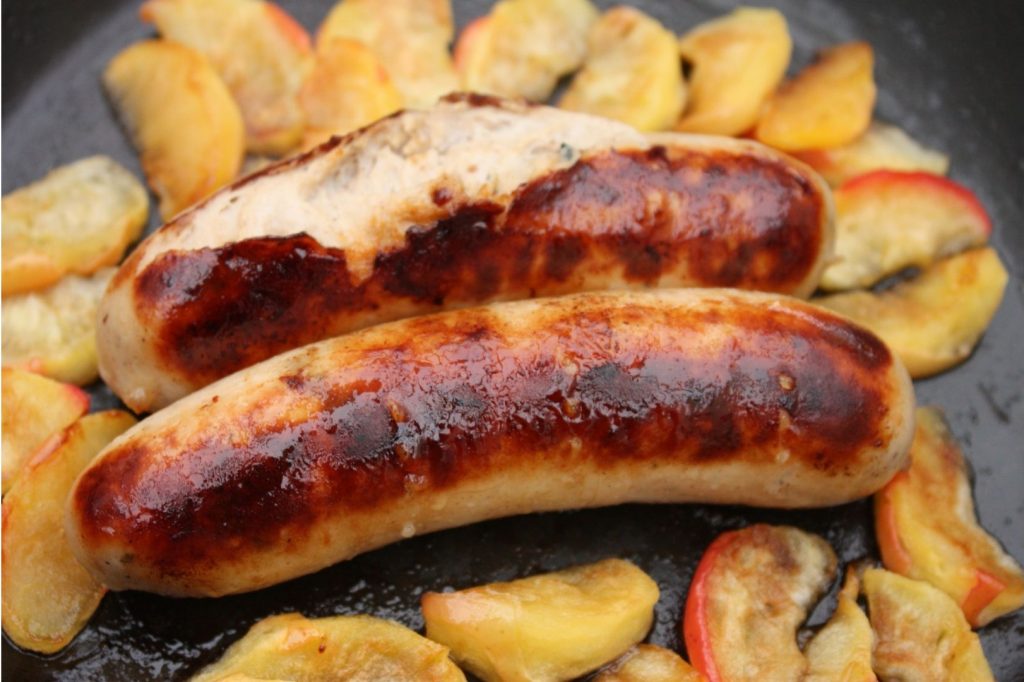 Despite being a little further from the German border than Strasbourg, Reims certainly isn’t immune from the influence of some very German cuisine from time to time. And this is no bad thing, as the delicious boudin blanc goes to prove.

This French white sausage is a dish that has its roots based right in the Champagne Ardenne region, and was originally a Christmas treat, so you’re sure to find lots of dishes incorporating this classic piece of Reims cuisine as a hearty meal of potatoes and vegetables – perfect for those cold winter nights. 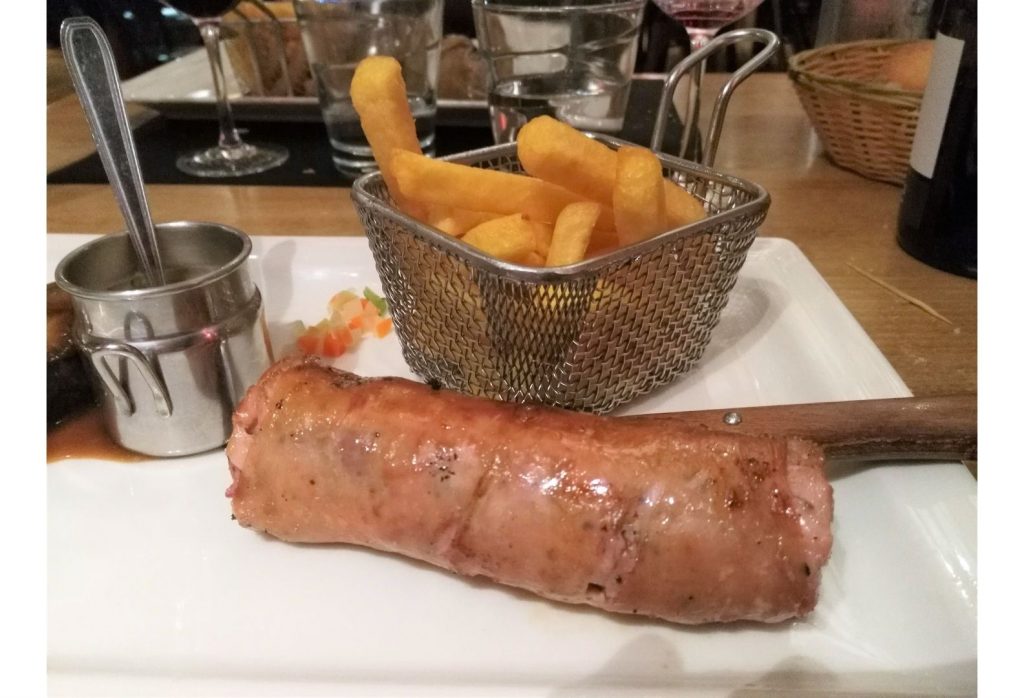 Sticking with the sausage theme, an andouilette is a variation of the globally known meat but filled with a coarser filling made up of pork, onions, seasoning, and an ingredient for the braver eaters around, intestine. While it may not sound like the ideal food for a Christmas market, it’s about as authentic as French cuisine gets, and you’re not likely to find it outside of France.

Tried when it’s been cooked well and with a selection of other French treats, this is one dish that you’ll certainly remember trying, and what that you’ll be able to relive as you tell friends and family back home. After all, what is travel about if it’s not trying something new?

Here at Not In The Guidebooks, we aim to help you cut past the touristy front you’ll often come across when travelling, and really dig under the surface to discover an authentic, local culture, cuisine and people. Whether it’s helping you connect with locals to see what they do, to the restaurants where the locals eat, or to the sites that lie just a little of the beaten track, we provide tours, breaks or holidays that create truly memorable travel experiences.

Christmas Breaks with Not In The Guidebooks 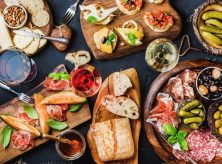