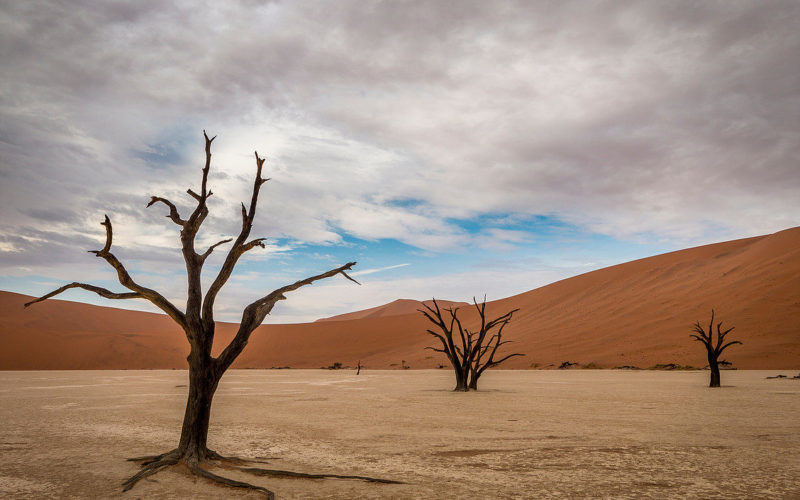 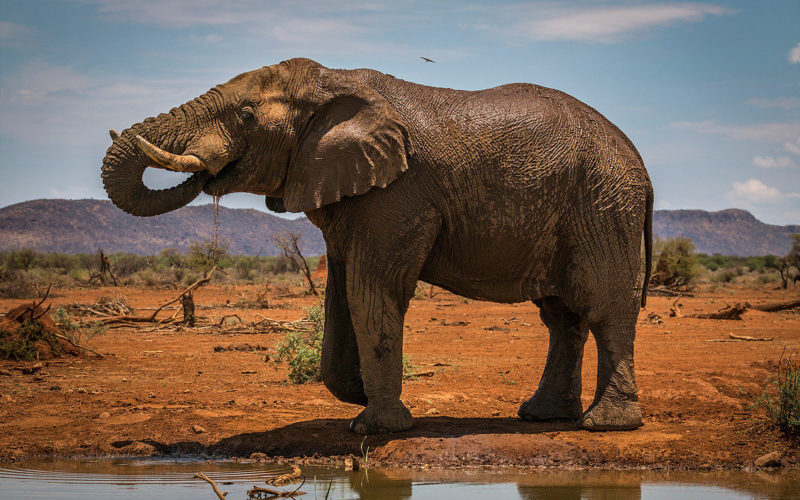 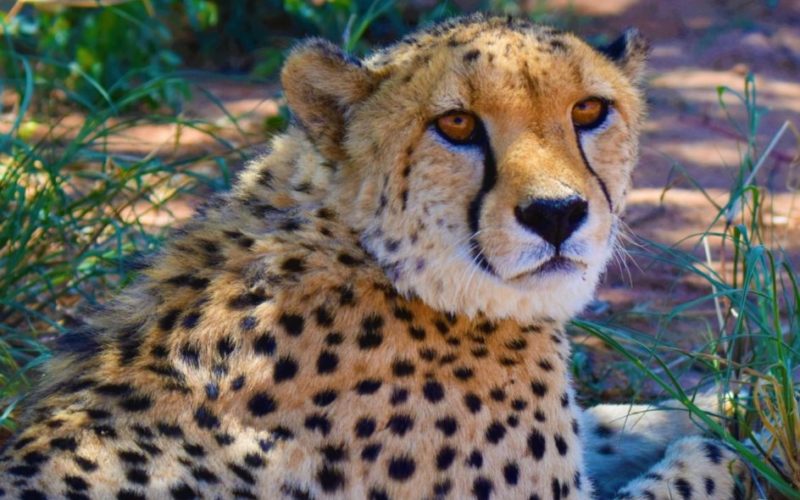 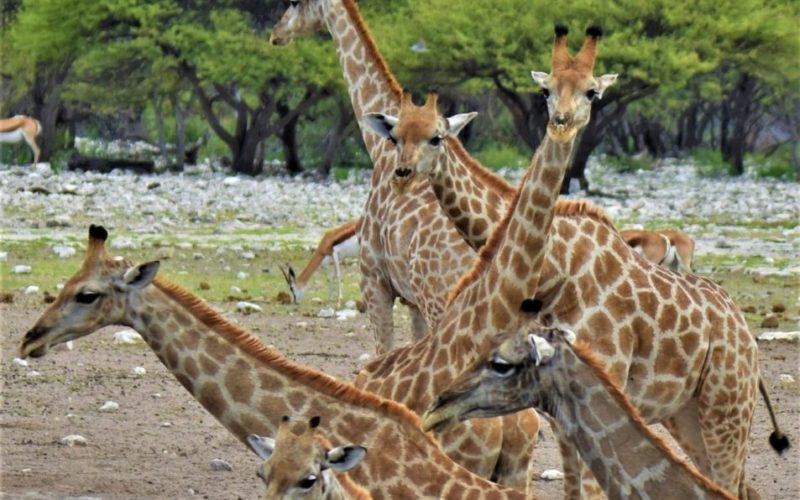 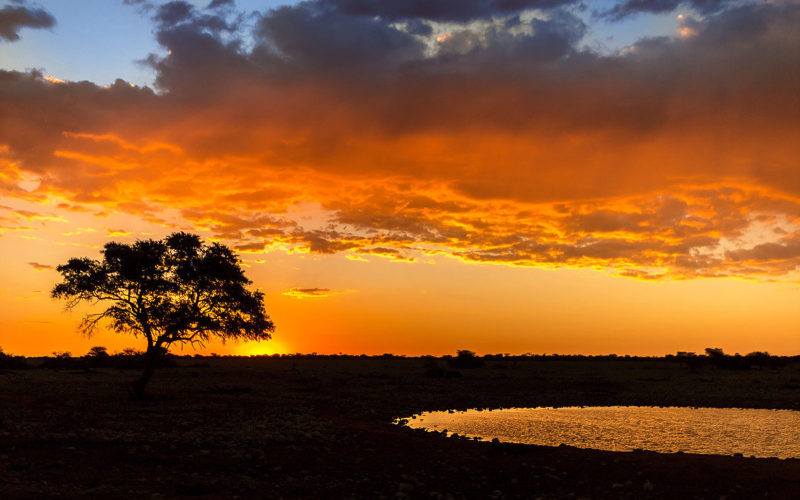 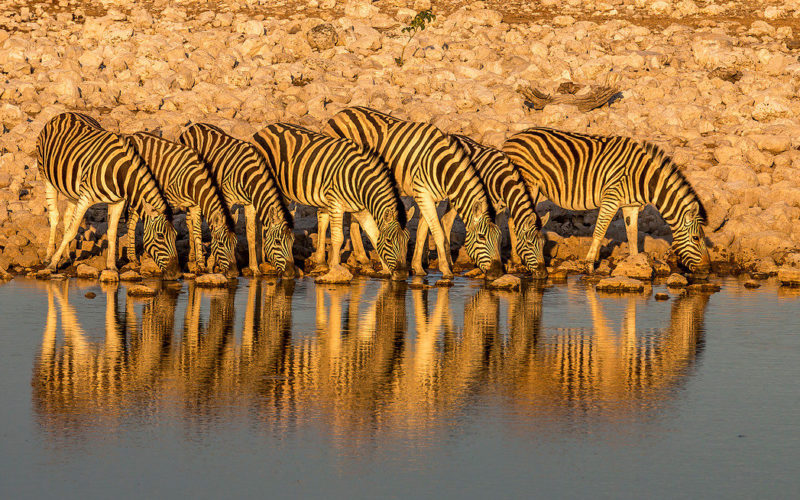 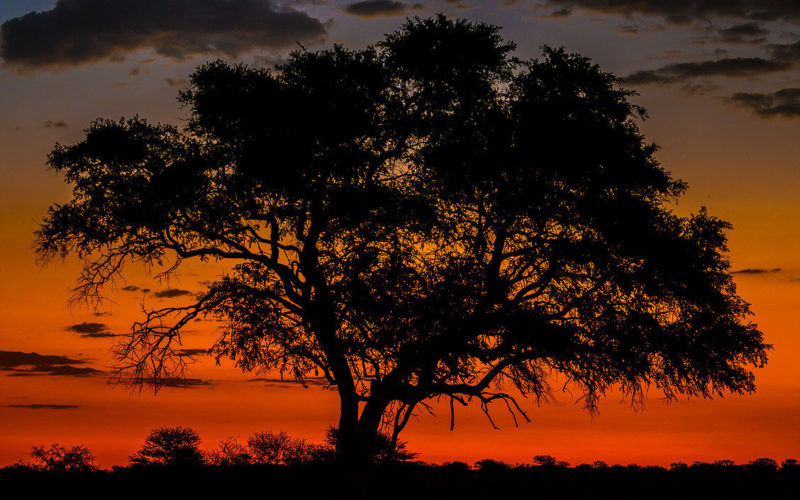 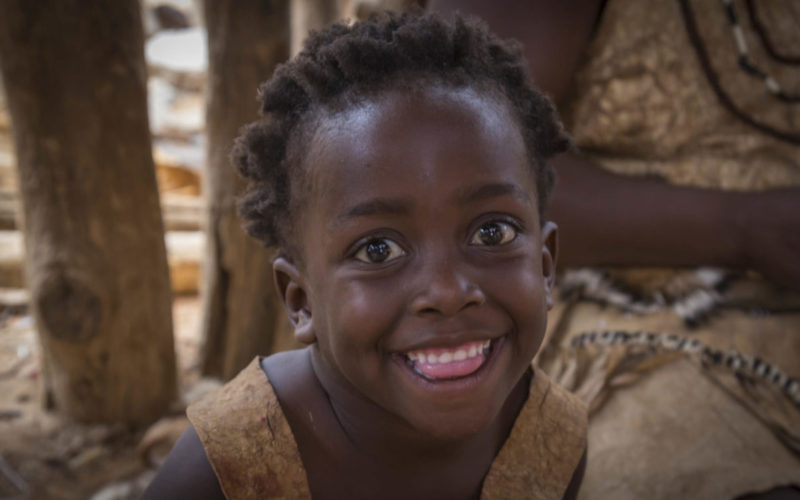 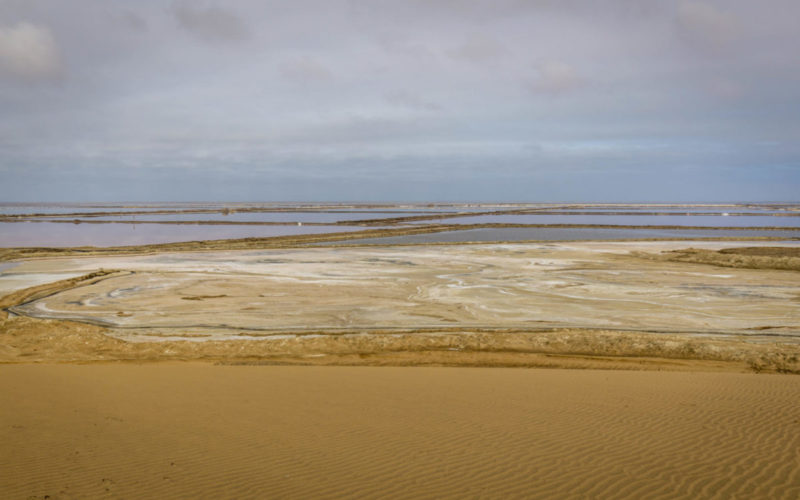 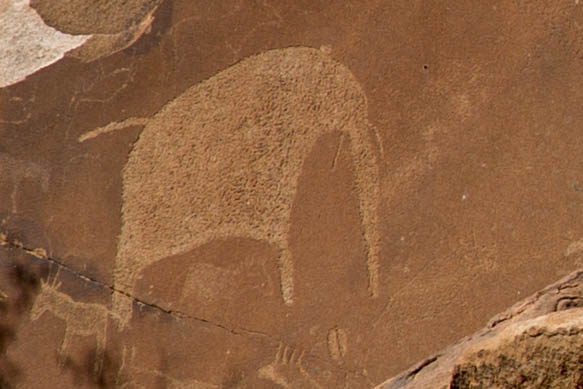 Namibia – a magnificent country with more than its fair share of the weird and wonderful. Join this 14-day tour and get off the beaten track to experience the more remote aspects of the country. Scale one of the highest sand dunes in the world and go in search of the famous desert elephant. In Etosha National Park, wildlife lovers will be in their element and adrenaline junkies can get their kicks in Swakopmund. But there is much more to the country…

Few countries in Africa can match Namibia’s sheer natural beauty. The country’s name derives from its (and the world’s) oldest desert, the Namib, and there are few more incredible desert expanses on planet earth. From the sand sea and perfect dead-tree valleys at Sossusvlei, to your own David Attenborough safari wildlife moments.

Located in North-western Namibia, Etosha East is a protected sanctuary and one of the most accessible game reserves in Southern Africa. Etosha East boasts vast open plains scattered with semi-arid savannah grasslands and many watering holes. The park is teeming with an array of wildlife including lion, elephant, black rhino, and giraffe, as well as a variety of birdlife featuring flamingo, ostrich, eagle, hornbill, and owl.

Appropriate for this vast country with its epic landscapes, Sossusvlei still manages to feel isolated. The dunes appear other-worldly at times, especially when the light hits them during sunrise or sunset and are part of the 32,000-sq-km sand sea that covers much of the region. They tower as high as 325m and form part of one of the oldest and driest ecosystems on earth.

But let us not forget about the charming city of Swakopmund with its quirky mix of German and Namibian influences, adventure options, laid-back feel, and cool sea breeze. Or Windhoek, the capital of Namibia, which is encircled by magnificent mountains, expansive valleys, fertile farmlands, lodges, and luxury guest farms. Namibia is the perfect bucket-list destination for photographers, animal lovers, and the adventurous.

Visit the AfriCAT sanctuary for close encounters with large cats before they are released into a safe, yet wild environment 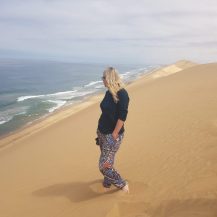 It is almost impossible to describe Namibia in words – so we really count on our customers’ feedback which is always simply ‘’the best holiday I‘ve been on - I feel like I‘ve just visited 4 countries“ because that‘s what Namibia is – a country of contrasting landscapes and a constant pleasant surprise. Having a small local team based in Namibia means we can offer a really personal, authentic service and experience of this wonderful country. Windhoek, the capital of Namibia, is encircled by magnificent mountains, expansive valleys, fertile farmlands, lodges, and luxury guest farms. The larger Windhoek area is surrounded by vast valleys, thick scrub, rocky hills, and blanketed in golden savannah. You will be picked up at the airport and taken to your hotel. Whilst today is only an arrivals day, we recommend exploring the city on foot to get a feel for the place before setting off on your African adventure.

The lodge is located on a pristine reserve which is home to 19 different species of game, only a 5-minute drive from the heart of Windhoek. This is the accommodation featured. The first ultra-luxurious sanctuary of its kind in the Namibian capital –contemporary and stylish but with a warm heart and authentic African soul. Midway between spectacular Etosha National Park and the capital city of Windhoek, lies well-known Okonjima Nature Reserve. This 22 000-ha nature reserve is home to AfriCAT, a carnivore sanctuary, which gives big cats in captivity, the opportunity to be released back into the wild. Here they can live as completely independent hunters but in a protected area. You will enjoy a thrilling cat tracking guided safari, leopard-spotting, off-road night drive and learn about the San culture along the Bushmen trail.

Located within the secluded wilderness area of Okonjima Nature reserve, has majestic sunset views and spacious rooms. This is the featured accommodation. Located in north-western Namibia, Etosha East is a protected sanctuary in the eastern part of world-renowned Etosha National Park, known as one of the most accessible game reserves in Southern Africa. Etosha East boasts vast open plains scattered with semi-arid savannah grasslands dotted and animal watering holes. The impressive 5000-square-kilometre Etosha salt pan makes up a large area of the eastern side of the park, so large it can be seen from space.

This remote area is teeming with an abundance of wildlife such as lion, elephant, black rhino, and giraffe, plus a variety of birdlife featuring flamingo, ostrich, eagle, hornbill, and owl. Today is a drive day with free time upon arrival. There are no activities on this day although you do drive through the park so there are viewing opportunities.

Spacious chalets and great attention to décor which is an eclectic blend of traditional African and modern works of art mixed with original older paintings. This is the featured accommodation. The Fort is the only of its kind in Namibia. Massica raw walls, stunning cladded features, and a huge tower with views toward Etosha. Located just south of the boundary of Etosha National Park in north-western Namibia, Etosha South makes up the southern region of this wilderness paradise. Ongava Private Game Reserve shares the southern boundary with Etosha National Park and the lodge overlooks landscape commonly dotted with roaming wildlife. The national park is accessed via the southern entrance at Andersson’s Gate. It is common for visitors to view a variety of wildlife including lion, giraffe, elephant, white and black rhino, and a multitude of other animals. You will enjoy a full day safari included to experience just how incredible this park is.

Spacious bedrooms with beautiful scenery and cosy atmosphere. Each chalet has a large balcony offering stunning views. This is the featured accommodation. Ongava is one of Namibia’s premier lodges. Impressive views over the camp’s waterhole from the main lounge. This vast desert landscape is known as one of the most beautiful regions in Namibia. Huge, untamed and ruggedly beautiful, Damaraland offers an exceptionally scenic landscape with wide-open plains, cascading valleys, and spectacular rock formations. The major attractions are the sacred Spitzkoppe, the Brandberg, Twyfelfontein, Vingerklip and the otherworldly petrified forest. On today’s full day safari in search of the desert elephant, you can enjoy dramatic vistas, catch a glimpse of the rare desert-adapted elephant, and enjoy spectacular stargazing in crystal-clear night skies from one of the many safari camps dotting Damaraland. There may even be time to visit one of the local communities. Do not miss the opportunity to view Damaraland’s world-famous ancient rock art and savour a refreshing sundowner as the sun sets.

Huddled in the rocks, with sweeping views across the Aba Huab Valley. The setting is one of intimacy and space, with a swimming pool nestled in the rocks and a scattering of bungalows. This is the featured accommodation. Successful of a partnership with local conservancy, the camp has been built to be as eco-friendly as possible, minimising its environmental footprint. Set along Namibia’s spectacularly scenic coast, the seaside town of Swakopmund is known for its spacious avenues, colonial architecture, and otherworldly surrounding desert terrain. Founded in 1892 as the main harbour for German South West Africa, Swakopmund is often described as being more German than Germany. Now a seaside resort town, Swakopmund is the capital of the Skeleton Coast tourism area and has plenty to amuse visitors. The quirky mix of German and Namibian influences, adventure options, laid-back atmosphere and cool sea breeze make it a popular Namibian destination. Visitors have the option to experience several exciting activities (at own expense) including quad biking, horse riding, skydiving, sightseeing and fascinating desert tours. No activities are included during your time in Swakopmund, instead you have the freedom your experience to your own preferences.

Namibia’s finest and oldest hotel, Hana Hotel is an integral part of Swakopmund’s architectural heritage. Luxurious and sophisticated hospitality, classic atmosphere, and elegant interior. This is the featured accommodation. Set on the Mole, a historic and iconic site surrounded by Ocean on three sides, the Strand Hotel is ideally located to enjoy the beachfront and explore the city centre on foot. Located in the scenic Namib-Naukluft National Park, Sossusvlei is where you will find the iconic red sand dunes of the Namib. The clear blue skies contrast with the giant red dunes to make this one of the most scenic natural wonders of Africa and a photographer’s heaven. This awe-inspiring destination is possibly Namibia’s premier attraction, with its unique dunes rising to almost 400 metres these are some of the highest in the world. These iconic dunes come alive in morning and evening light and draw photography enthusiasts from around the globe. Sossusvlei is home to a variety desert wildlife including oryx, springbok, ostrich, and a variety of reptiles. Visitors can climb ‘Big Daddy’ or Dune 45 (depending on the day), one of Sossusvlei’s tallest dunes; explore Deadvlei, a white, salt, claypan dotted with ancient trees: or for the more extravagant, you can opt for a scenic flight or hot air balloon ride (at own expense), followed by a once-in-a-lifetime champagne breakfast amidst these majestic dunes.

A unique establishment in the Sossusvlei area. Enjoy the luxurious feel with spacious rooms, beautiful swimming pool and spa facilities. This is the featured accommodation. 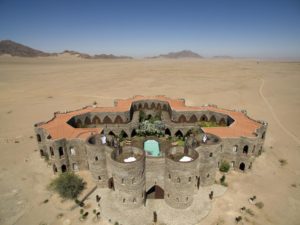 Inspired by the Dead Vlei, the thatched kulalas have a private plunge pool and merges seamlessly into the timeless desert setting. From Sossusvlei you drive back to Windhoek where you have one more night and free time to explore, purchase last minute souvenirs and reflect on your Namibian adventure.

If you want to get the best of one exotic place – rich in history, exotic animals, diverse culture, adventure-packed excursions and massive deserts – this is the holiday of a lifetime. Namibia is a fantastic destination for the traveler who wants to experience something new and exciting, with the freedom to self drive, or have the guidance of a knowledgeable, professional local guide. Don’t forget your camera!

Your exact itinerary and details will be sent to you upon booking.

Yes, as per the daily itinerary, you have the choice of opting for the mid-range accommodation standard, or upgrading to luxury accommodation for an additional cost.
Yes, you have the option of self-guided or fully guided depending on your preference.
If interested, please drop us a line or call, and we can make sure to personalise everything to your needs.