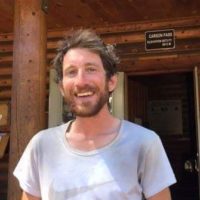 I grew up exploring this wild and remote stretch of the Cornish coast, often hunting for remains of old shipwrecks with my father. This got me hooked on the great outdoors, and led me to training as a wilderness guide deep in the forests of Finland. I have led guided walks all over Europe and the US, and hiked many of the world’s great wilderness trails including the 4,400km Pacific Crest Trail. Having spent over ten years hiking and guiding abroad I can safely say that my local area is one of the most spectacular landscapes I have ever seen. I am really excited to share my knowledge of this area with anyone who wants a walking adventure off the beaten track!

We also caught up with David to learn a little more about his walks, his stories and course, David himself!

Hi David, so what inspired you to start your tours?

I’ve been wracking my brains and I’ve realised I don’t really have the classic answer. I didn’t grow up in a sort of suburban area and then quit my job and then go and move to the countryside… I just grew up here, it’s just the most normal things and the most natural thing in the world to me.

My mum and dad have been taking me on walks since I was a toddler in the exact places where I’m guiding people now. In a way I wasn’t inspired, it’s just the obvious path to me. I guess just growing up around here, how could you not be inspired to go out walking and enjoy the amazingly beautiful scenery?

I wouldn’t have been able to do what I did ten years ago, the fact that everybody’s got internet and the fact you’ve got the coast path that goes 700 miles around Cornwall is great.

The part of north Cornwall where I live is pretty challenging, it almost feels mountainous because you go down to sea level and then you’re up to 130 metres, then down to sea level again – so I guess it is really good for the outdoors.  So I guess that’s what inspired me- the fact that it’s there!

I’ve always been into walking, but then I got into the guiding side about ten years ago when I was lucky enough to be accepted on this quite prestigious guiding school in Finland. They get thousands of applicants and they only select fourteen people a year and it’s all paid for by the Finnish government.

It’s intense learning, it teaches you how to be a guide, how to take care of yourself, a lot of basic survival stuff. We would weigh on scales different kinds of foods and work out calorie ratios, so it was really comprehensive and I’ve been guiding on and off for the last ten years in northern Sweden and the States.

Then I came back home and really missed the guiding and then I thought well hang on, actually, maybe people might like to see around here. It maybe took me going away for a bit, I’d been away for about 15 years working and travelling, and then when I came back I saw it in a different light.

Growing up it had just been kind of normal, you kind of take it for granted, then to get the perspective on it, was like, oh yeah it’s pretty nice!

What is it you love most about your job?

I guess I just really enjoy making people’s holidays. There are times where I’ll get some feedback and people will say “that was the highlight of my trip”. I love hearing that. I mean obviously, I love doing what I do because I love doing it for myself which is a big plus, but it’s so nice and equally as important that it means something to other people.

Because I live in this weird back land of Cornwall, everyone drives straight past here, drives on down to Newquay or St. Ives, so this part is relatively unknown to outsiders. It’s nice when pretty much everyone says “I wouldn’t have come here”. Often it’s something they would never have done without you – that’s why I do what I do.

Why are your tours Not In The Guidebooks tours? What makes them responsible, local, or off the beaten track?

I guess it’s local because it’s run by someone has grown up here, and my girlfriend who works with me grew up on the farm where our tiny house is, about five hundred metres down the road, so we know the area pretty well!

It’s nice for us because it means we can stay around here. A lot of my mates and people I grew up with, they had to move away. Maybe it’s a bit different now what with working from home, but if you don’t want to be a farmer or work in a surf shop or a supermarket, you might have to leave if you want to pursue a career.

Not In The Guidebooks is great because it’s supporting local people who can stick around and do what they like to do.

On the eco side, I like to think that going outside and walking around is pretty low carbon! On our farm we’ve got wind turbines and solar panels so we create more energy than we consume in the summer. Not so much in the winter!

I wouldn’t want to greenwash it and call ourselves ‘super sustainable’ – anyone that says they’re eco-friendly, I don’t really buy that, as soon as you’re born bad for the environment! You can mitigate it somewhat, but we like to think we’re pretty good.

It’s not like you’re driving all over the place when you get here. The people here we get from Not In The Guidebooks, they come and stay and then we just walk out the door, do a nice walk and then walk home again.

In terms of off the beaten track, there are some paths I take people on that aren’t on a lot of maps, little shortcuts and little tracks. You could walk around here on your own, but it would be different because a lot of the footpaths are blocked up and a lot will go the other way from what the map says.

If you come with me you’re getting that personal knowledge of the area, and you will also stay on the farm that I live on. That’s what distinguishes Not In The Guidebooks I think from other places you could stay or stuff you can do. I like to think you get quite a personalised holiday, you’re living on a working farm and you’re getting fresh eggs from the farm, then I’ll be living next door and will knock and take you for a nice walk.

And finally, what’s a recent funny thing that’s happened to you on one of your trips?

I had the first people that came through Not In The Guidebooks back in April when the weather was really nice. We’d booked a table at the pub, and we were going to walk there, and then go for lunch at the pub and then walk back.

So I booked a table, it was when you couldn’t go inside and all the weird rules were happening. It felt sort of weird booking a table and it was all very military operation to book it and everyone was very stressed.

So you get a table, okay you’ve got it great. And it was funny because the paths we were using are paths that absolutely nobody uses apart from me, my girlfriend, her mum, my mum and my dad, and then maybe one or two others but they’re really remote footpaths where you wouldn’t expect to see anyone.

And it’s funny that in a little village everyone obviously knows each other, so my guests were asking me all these questions and finding out about the different characters and we start off on the walk to the pub.

I know exactly how long it takes, I’d left plenty of time and time to stop off, and then as soon as we got out the door we bumped into my dad, and of course they wanted a chat with my dad, and then two seconds later we bum into a neighbour, and have another little chat.

It’s all ‘oh where are you from?’ and I’m thinking ‘come on’ because everyone here just loves to chat. Then we get into the woods and we bump into my mum. And then my sister. And then we bumped into a mate of mine later on, so had of course, seen basically everyone that ever uses that path. Needless to say we were late… 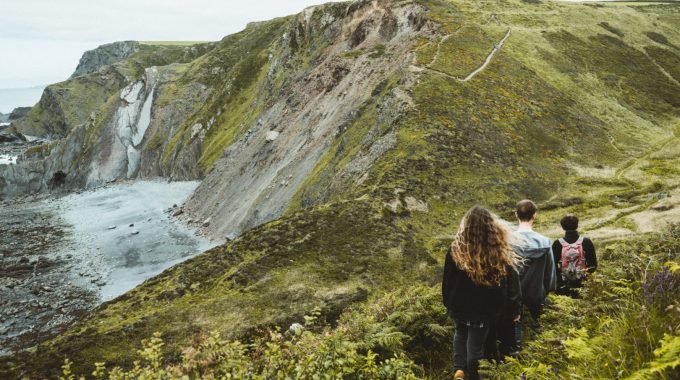 Escape to this quirky house with beautiful sea views on a remote farm in Cornwall, for a unique stay that is the perfect[..] 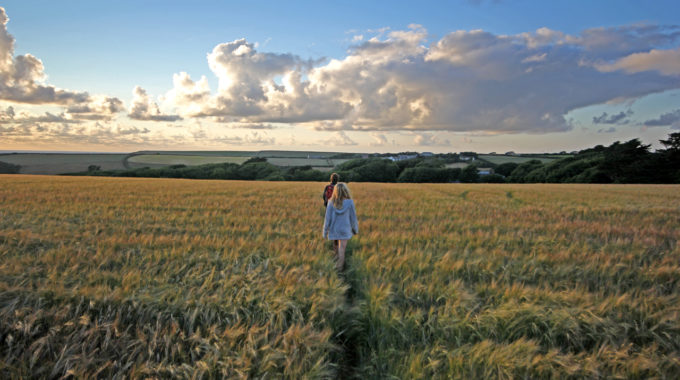 Walking Retreat in Cornwall for Family and Friends

By day, experience one of England’s most spectacular and thrilling walking areas with an expert local guide, with the [..] 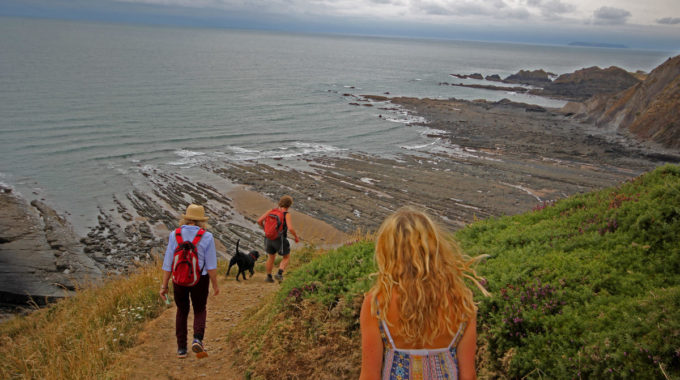 By day, experience one of England’s most spectacular and thrilling walking areas with an expert local guide, with the [..] 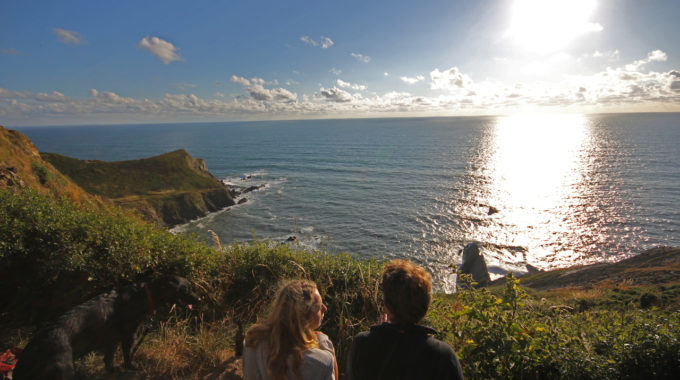 Get out of the house and into the fresh, clean air of Devon and Cornwall, discovering dramatic coastlines, stunning trai[..]

Take me there
We use cookies to ensure that we give you the best experience on our website. If you continue to use this site we will assume that you are happy with it.OkPrivacy policy