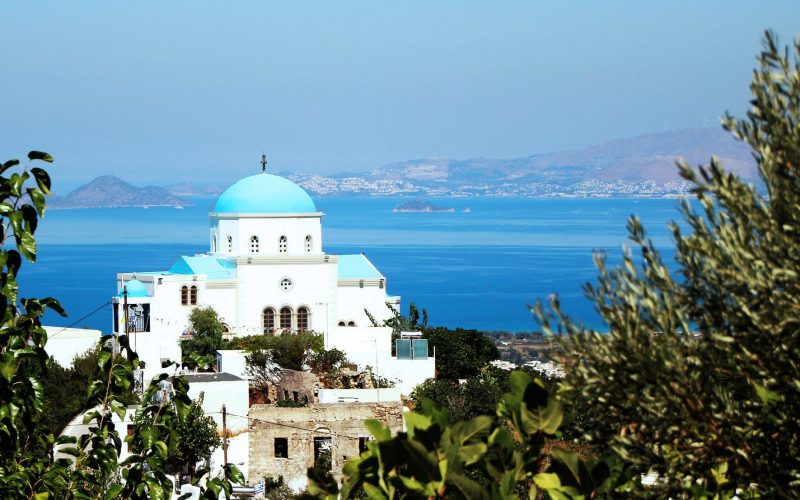 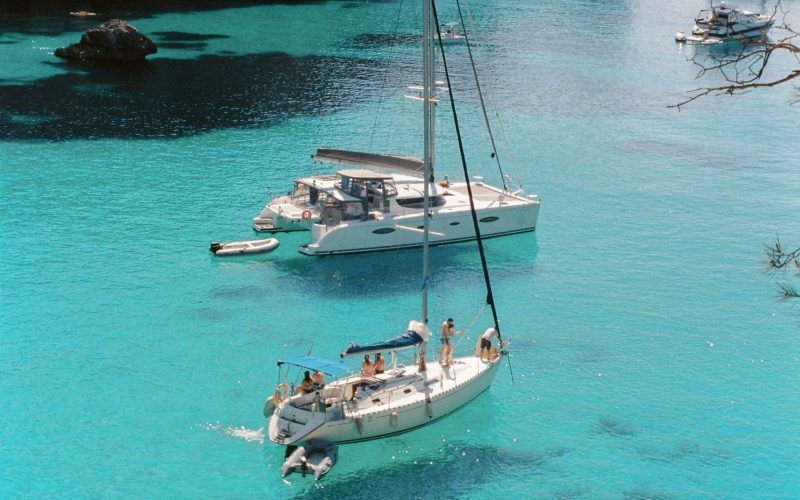 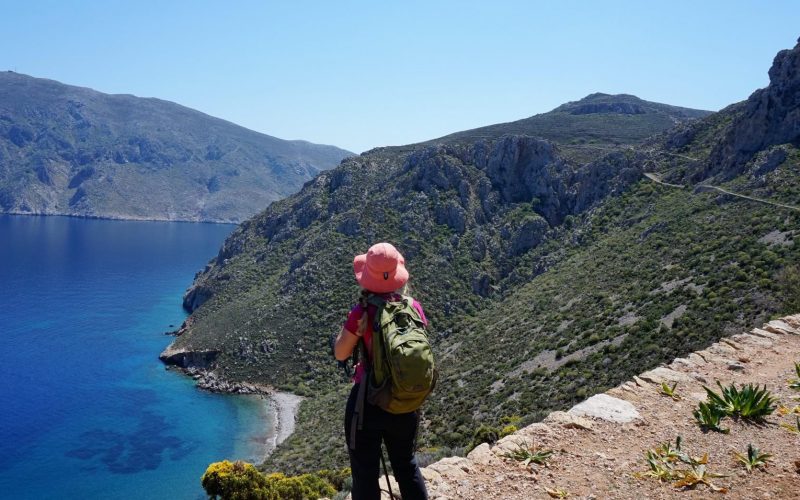 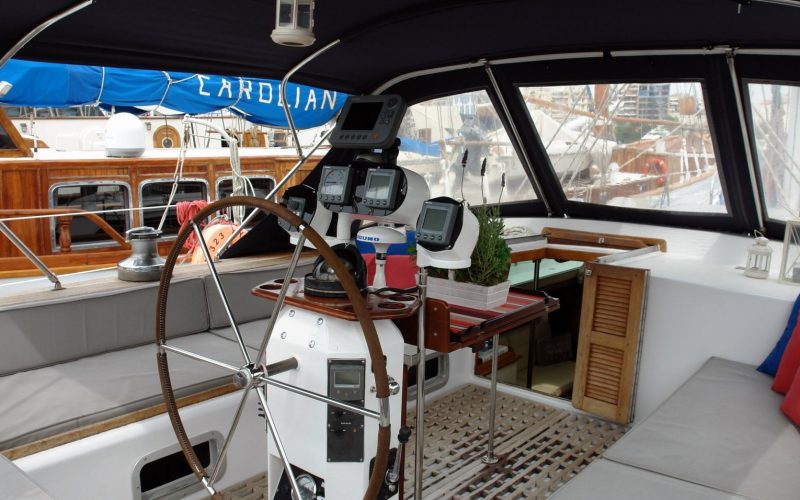 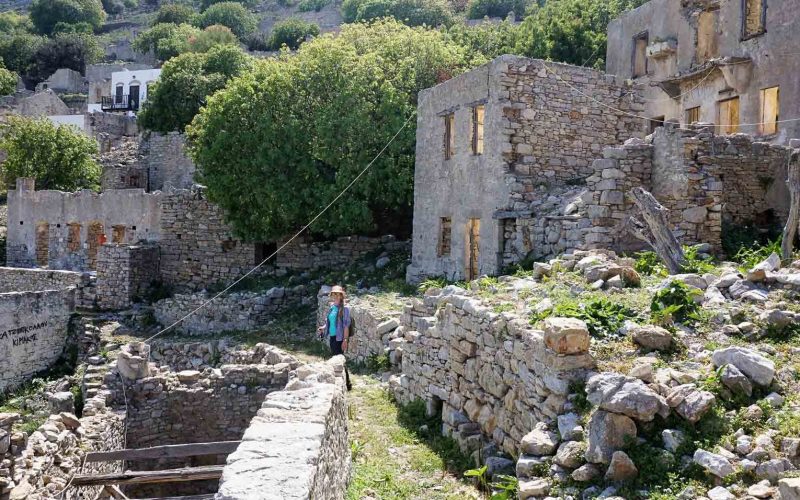 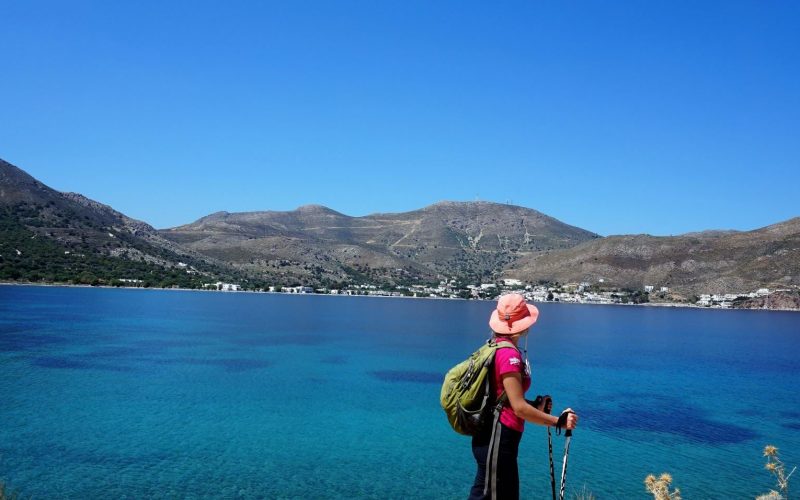 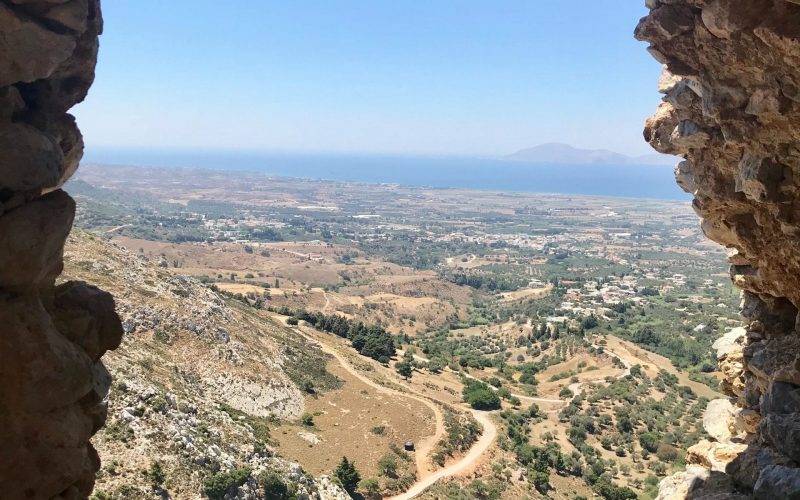 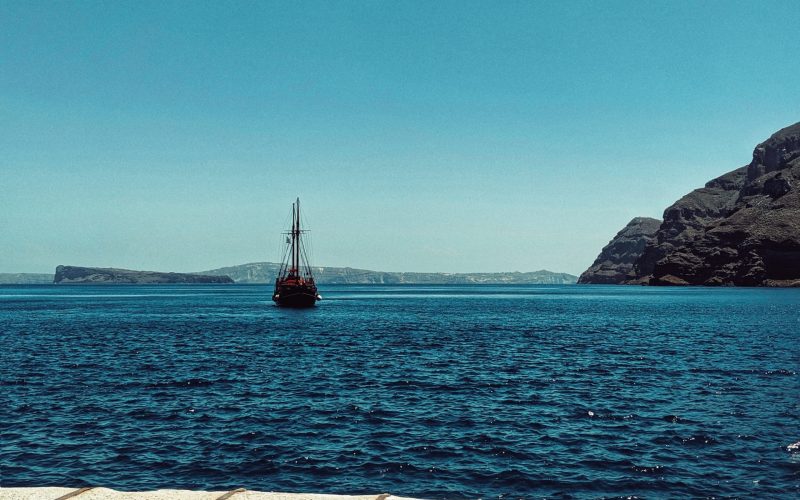 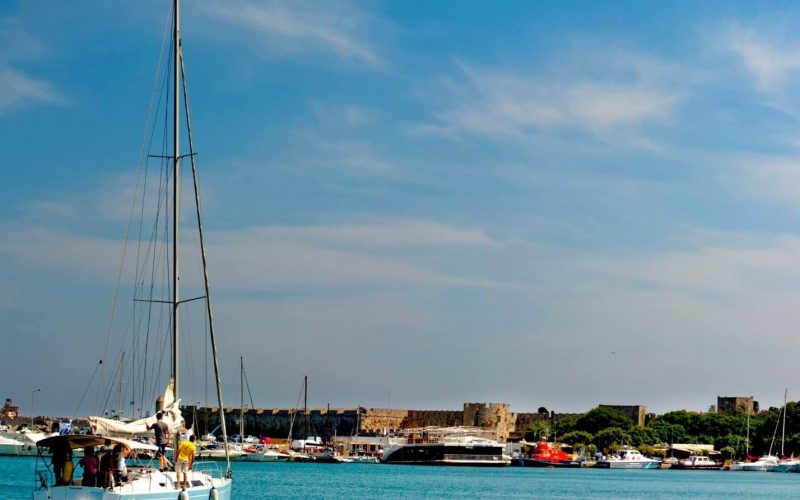 Sailing and Hiking the Dodecanese Islands

Sailing and Hiking the Dodecanese Islands

Embark on a wonderful week's sailing, calling at beautiful unspoilt islands, travelling across the deep blue Adriatic sea. The Dodecanese Islands are the ideal sailing destination, with perfect weather conditions throughout the Summer. So with the meltemia (Northern winds) in your favour, you'll sail on your own chartered boat from Kos to Rhodes, exploring four different islands and countless picturesque secluded bays on your way. Every island has a unique character and your guide will ensure you make the best of this amazing sailing experience.

Your sailing and hiking tour starts on the island of Kos. Here you’ll meet your friendly crew before embarking on the grand sailing ship which is your home for the week. Your first stop is the volcanic island of Nisiros, with its pretty whitewashed houses and tavernas lining the harbour.  You will have plenty of time to swim and in the afternoon you’ll hike to Nisiros’ famous volcanic crater, where you will feel like you have arrived on another planet.

Your next destination is Tilos, unspoiled and truly authentic! You explore the island’s lovely beaches, abandoned villages and encounter the island’s goat population which by far outnumbers the human one!

Your journey continues to colourful and laid-back Halki . You also enjoy a stop on the deserted island of Alimia, and the last tiny island where you you set anchor during your voyage is vibrant Symi, a cute yet cosmopolitan island. Your Greek island hopping trip ends on Rhodes, renowned for its UNESCO World Heritage Medieval Town and rich history.

Explore secret bays, beautiful beaches and off the beaten track islands by sailboat

Stride out on incredible hikes across the lush Greek islands We organize outdoor activities in classic Greek destinations (eg. Santorini, Athens, Crete, Rhodes ) as well as in less known regions of Greece (Tzoumerka, Karpenisi ), but they are all off the beaten path, and we aim to support local communities and contribute to their more sustainable development. The concept of meaningful and respectful travel lies in the heart of our endeavors. We strongly embrace and implement a socially and environmentally responsible policy by promoting the protection of nature and environmental awareness. We strive to educate and make a positive impact in this corner of the world, whilst ensuring that you experience the real Greece and make life long memories and friends on the way! 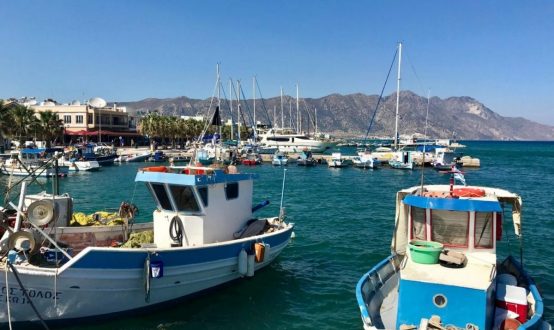 Once you arrive in the beautiful island of Kos, you will stay the night at a boutique hotel. Here, you will meet with your guide for a briefing about the week ahead. You will be able to discuss the itinerary for the week with your guide and ask any questions you have about the activities planned.

Depending on what time you arrive in Kos, you will have some free time to wander around the medieval castle of Kos and through the streets of the new town.

Spend the evening exploring the town, and spend the night in the hotel in Kos. After a delicious breakfast to set you up for the day, it’s time to meet the crew who warmly welcome you on board the sailing boat and your home for the next few days.

After they give you all the information you need to know, it’s time to set off for the first of your exciting adventures – sailing & hiking the Dodecanese Islands.

The first stop on your sailing and hiking tour is the magical island of Gyali, close to Nisiros. Both islands belong to the volcanic arch of the Aegean, so the colour of the land there is undoubtedly beautiful.

You can enjoy some time swimming and snorkeling in Gyali’s crystal clear waters and then enjoy a reviving lunch on board. In the early afternoon you’ll dock in the port of Nisiros, Paloi, and you will set off for your first walk – to the volcano!

The experience of walking through a volcanic crater is breathtaking, and can only be described as a one-of-a-kind experience. In the evening, you’ll enjoy a well-deserved delicious dinner at a seaside taverna.

Throughout the tour, you will stay on a sailboat, which you can select between the Armida Sailboat or the premium Magic Irwin Sailboat. 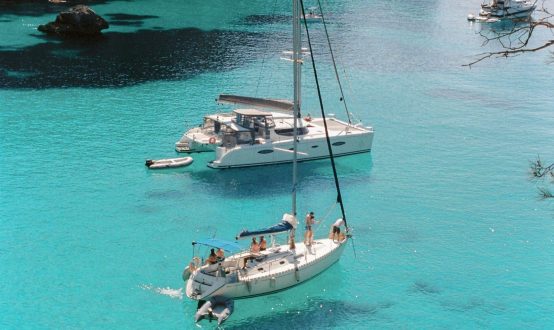 After breakfast, you will set sail to your next destination, Tilos, an island that has recently been given an award and the title of the Greenest Island in the Mediterranean, as its energy derives entirely from solar and wind power.

After swimming stops in the middle of the Aegean Sea and a wonderful refreshing lunch on board, you reach the main port of Tilos, picturesque Livadia.

Today’s hike combines all you have ever thought of Greece. Starting from Livadia, the trail leads us along the coastline to lovely beaches, including a ‘red beach’, which is called this due to the unique colour of its sand.

Having reached Lethra Beach, a tree-lined paradise, you will begin the ascent towards Mikro Chorio (‘small village’ in Greek). Once a densely populated village, it is now deserted. The houses have been abandoned and the narrow streets and alleyways, once vibrant, are now silent, and empty except for the goats who roam around here.

During the summer months a bar is open for visitors of the ghost town and you can have a leisurely drink and stroll around this unique setting. After exploring, you will start the descent back towards our starting point, Livadia.

Dinner will be served on the boat and you will have a peaceful night moored at Tilos harbour. Off The Beaten Track Islands

The fourth day of your sailing and hiking tour takes you to the deserted island of Alimia, before visiting the quaint island of Halki, once declared the Island of Peace and Friendship.

You’ll discover its first wide bay, where the main town once stood. This village was declared a protected settlement in 1978. There, disembark in order to hike among its untouched treasures. You’ll find yourselves wandering along forgotten trails as the island has been uninhabited since the Second World War.

In Hellenistic times, Alimia was used as a point of anchorage and an observation point for the Rhodian fleet. At the time a tower was constructed on the highest peak of the island, on its eastern side and still survives to this day. Part of this Hellenistic tower was used for the construction of a Medieval Castle in 1475 by the Knights of Saint John, who had conquered The Dodecanese Islands in that era.

Once you arrive at the second significant bay of the island, you have the chance to swim in its crystal clear blue waters, and then enjoy lunch on board your boat.

*The hike on Alimia Island is considered strenuous. If you or our guide decide not to go ahead with it for any reason, a visit to Alimia bay is an alternative, followed by lunch on board and then a wonderful walk on Halki.

In the early afternoon, you’ll sail on to beautiful Halki. Its port resembles a postcard, with the colourful facades of its building, which once belonged to rich sailors. Finish off day 4 of your adventure with a lovely dinner by the sea. Cook with the Flavours of Greece

Today you’ll start early in the morning. Your destination is Symi, the most cosmopolitan but also the most remote of the Dodecanese Islands. On your way you’ll stop at several bays to enjoy the emerald green colours of the water at spots like Sesklia.

From there, you’ll have a delicious lunch on board, before you reach the port of Symi early in the afternoon. Once anchored in Symi town, you’ll walk to Pedi, a calm bay near the town. At St Nicolas taverna it’s time to learn how to cook some of the famous Greek dishes that you have been enjoying throughout your trip. At sunset, you’ll walk back to the port, enjoying picturesque views of Symi on the way. On the last day of your sailing and hiking tour, you’ll sail to Rhodes. Rhodes is the largest island of the Dodecanese and boasts a rich history. On your way to Rhodes, you will have the opportunity to swim in some more bays, like St George Disalonas (on Symi Island) and enjoy a delicious lunch on board, before reaching Mandraki harbour.

Entering the harbour is a truly unique experience due to stunning views of the walls that surround the Old Town and which date back to medieval times. During the afternoon, walk inside the city’s walls to explore this medieval town which has been declared a UNESCO World Heritage Monument.

Take in the mysterious atmosphere of the Old Medieval Town and its imposing castle and wander through its narrow alleys before enjoying a farewell dinner there and checking into your hotel. Unless you have decided to extend your trip further, today you will be transferred to the airport. We’re sure you’ll have enjoyed you’re week as much as we’ve enjoyed hosting your amazing experience.

Although we’ll be sad to see you go, we’re sure you will be back to join us soon on another trip of a lifetime!

Your sailing and hiking adventure begins in Kos, a Greek island near to the coast of Turkey. From there, you’ll visit islands such as Alimia, Tilos and Nisiros, before finishing in Rhodes.

Your first night will be spent on Kos and your last night in Rhodes , throughout your island hopping tour you will stay on a sailboat, you can select either Armida Sailboat or the more premium Magic Irwin Sailboat (or similar).