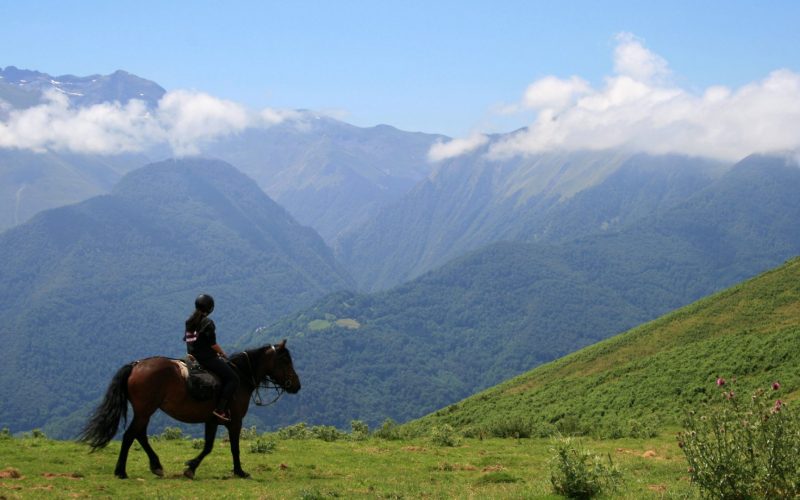 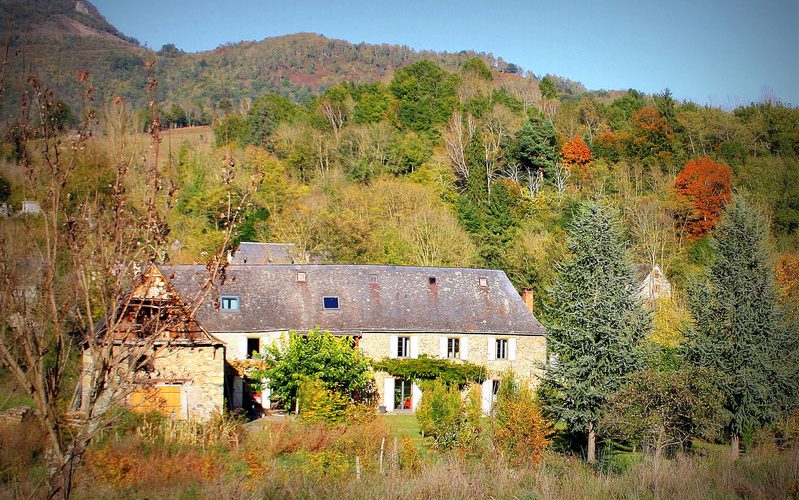 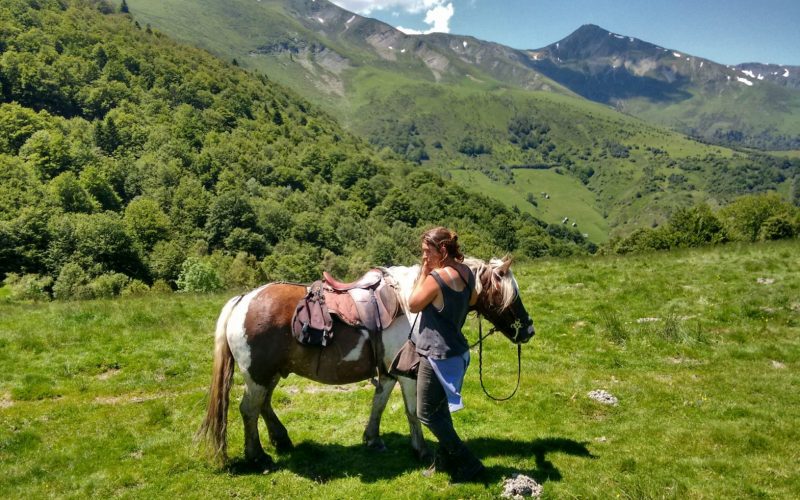 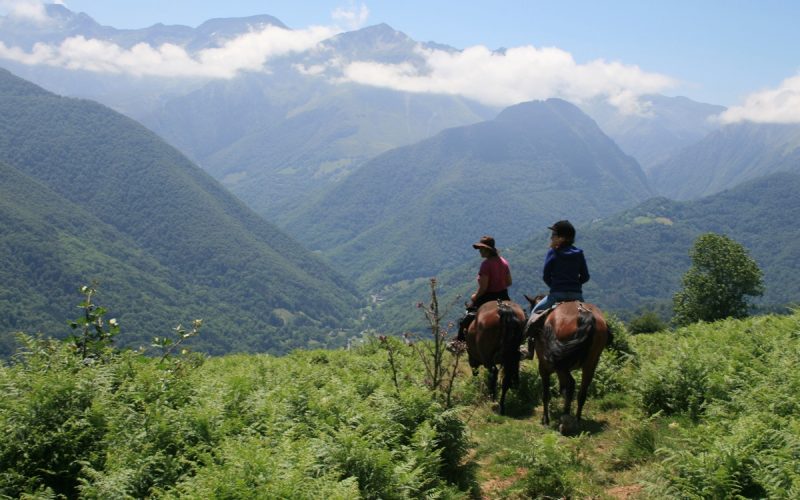 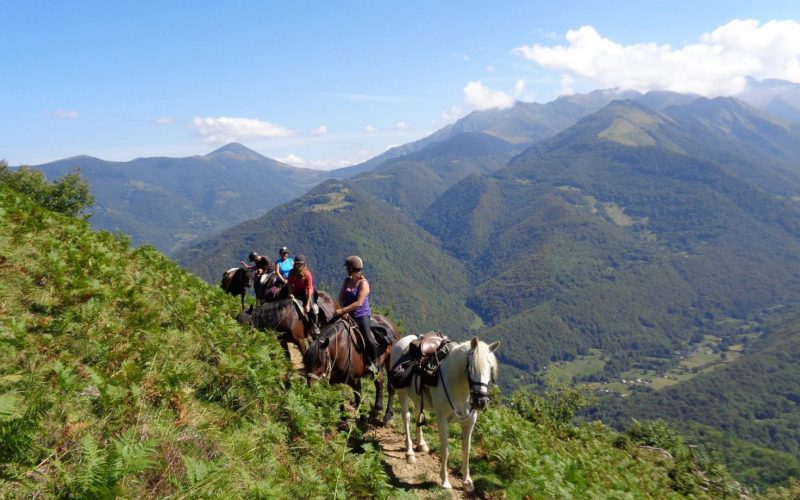 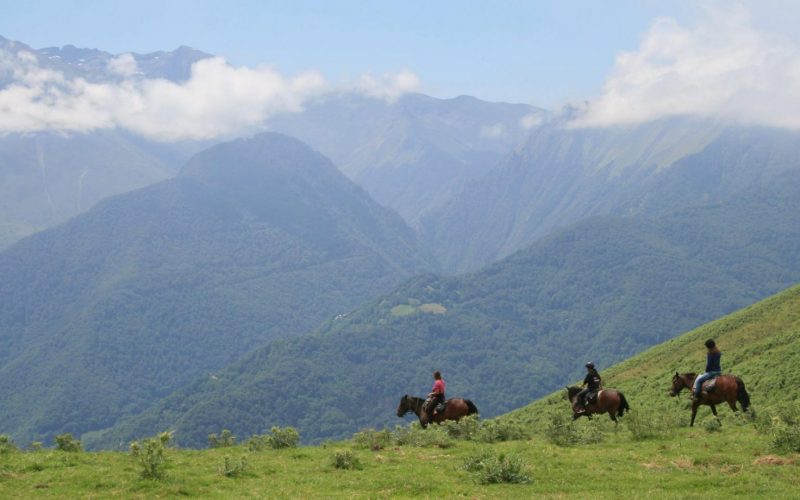 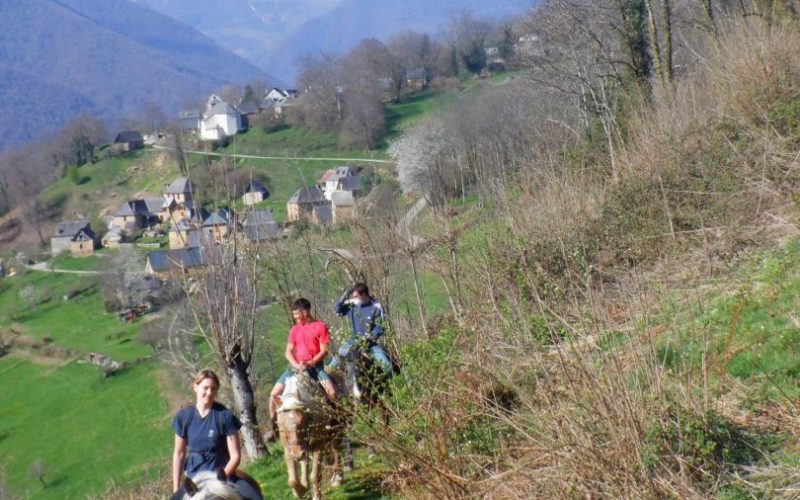 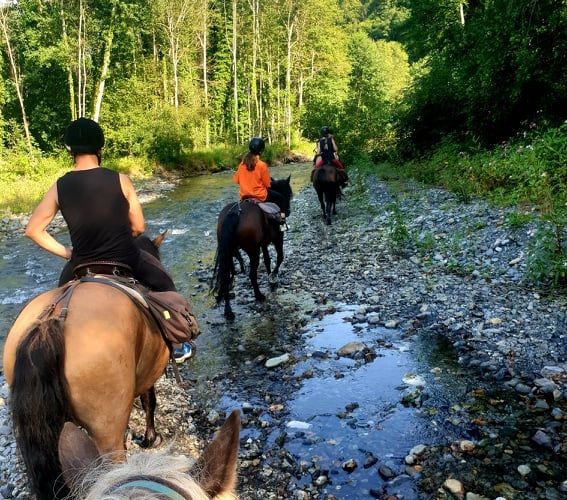 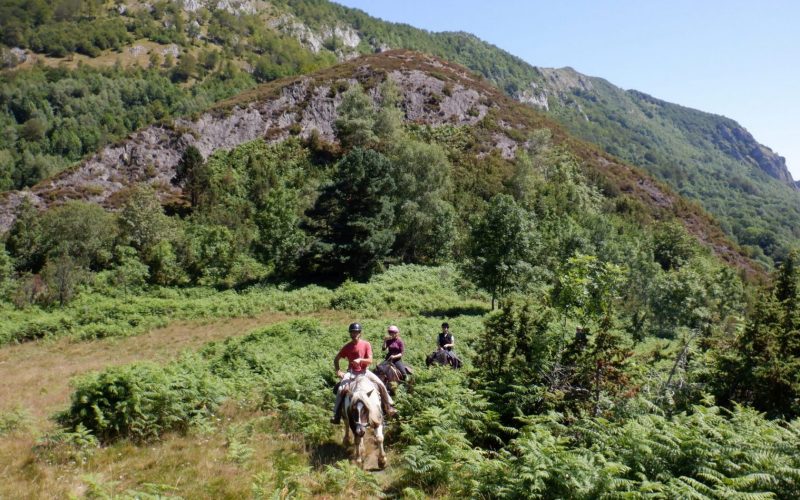 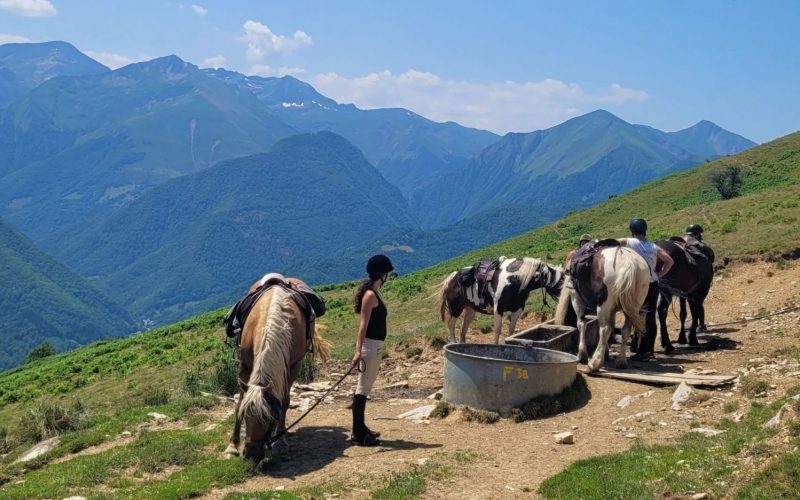 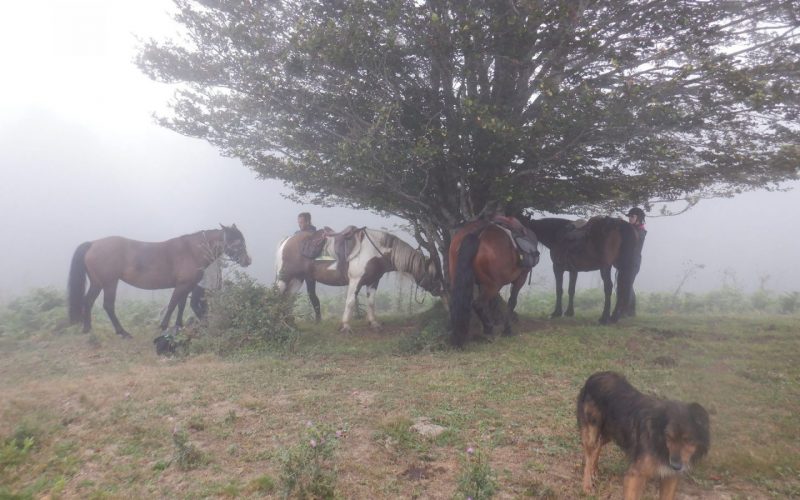 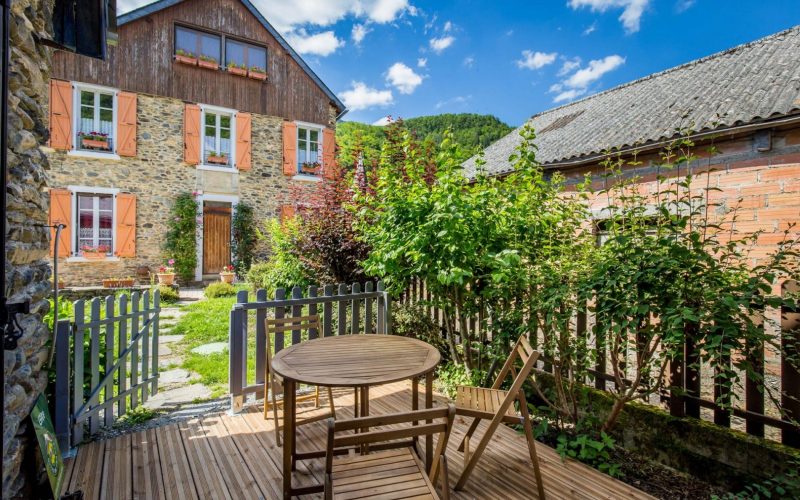 Horse Trekking Experience in the Pyrenees

Horse Trekking Experience in the Pyrenees

An unmissable horse riding experience that immerses you in the pastoral landscape that is the rugged Couserans region of the Ariège Pyrénées mountains, and gets you off the beaten track on horseback like never before.

This 5-day 6 night horse trekking experience is specially designed for the adventurous, intermediate-level horse rider who wishes to discover the wildly beautiful mountain landscapes of the Ariège Pyrénées.

This circular trek will be guided by Chantal, who knows the rugged environment of this area of the Pyrénées mountains like the back of her hand. She breeds the sure-footed, good-natured horses that you will ride, horses that are perfectly adapted to this mountainous terrain and the ideal mount for a multi day horse trek.

Each day, you will spend between 5 and 7 hours in the saddle, discovering authentic mountain hamlets where time appears to have stood still and where traditional ways of life have been preserved.

You’ll ride through shaded woodland trails, and along mountainside paths that afford the most breathtaking views of the high mountains that border Spain. This is where the brown bears hang out, but don’t worry, they’re shy creatures who will do anything to avoid human contact!

At the end of each day, you can look forward to a hot shower, a hearty meal made from seasonal, local produce and a good night’s sleep in comfortable accommodation. Your bags will be transferred between your overnight stops, so you just need to carry what you need for your day on horseback.

Discover traditional hamlets and villages where time has stood still

Benefit from the company of a passionate expert local trekking guide, native to the area Penny first stumbled across the rugged and unspoiled mountains of the Pyrenees many years ago was instantly captivated.

Over the years she has curated exceptional local providers who provide truly meaningful experiences that introduce you to the beating heart of the Pyrenees.

Her aim is for you to return home from your holiday with a head full of amazing memories that will last a lifetime. You’ll be collected from Toulouse and transferred to the starting point for your trek in the beautiful Biros valley in the Haut Couserans area of the Ariège Pyrénées.

Your base for two nights is a cosy B&B at which your host, Véronique will treat you to some fabulous food, created from local, seasonal produce. Meet Your Mount and Set Off

After breakfast you’ll be collected from your B&B and taken to the stables to meet your mount for the next 5 days.

This first day will be a good introduction to the type of riding you can expect in the course of your trek, as your guide, Chantal, takes you up to a pristine Natura 2000 site where horses graze during the summer months.

You’ll have a lunch break at the Chapelle de l’Isard and soak up the sounds of Nature that surround you before continuing your trek on mountain paths and tracks back down to the valley below.

Time in the saddle – approx 5h

At the end of your ride you’ll return to your guest house in Sentein for a second night. Today you’ll head high on a real mountain experience, crossing high mountain passes and absorbing the far-reaching views of the rugged peaks that form the border with Spain.

You’ll cross from the Biros Valley up and over a mountain pass at 1200m alt, through mountain pastures where horses roam, absorbing the far-reaching and breathtakingly beautiful views of the higher mountains that form the border with Spain.

The traditional auberge serves fabulous food and the guest rooms are comfortable and well equipped. Today’s route takes you on part of the Saint Jean de Compostella route, along paths and tracks that have been used for centuries by traders and pilgrims.

First, you’ll ride up to the authentic little village of Portet d’Aspet at the head of the Bellongue valley where you’ll join the paths and tracks of the Saint Jean de Compostella, an ancient route used by pilgrims and mountain traders for centuries.

As you then make your way back down the Bellongue valley, you’ll pass through more authentic little villages where time appears to have stood still, noticing the unique architectural style of the buildings along the way.

Along the way, you’ll have the opportunity to pick up the pace on these gentler paths and stop occasionally to refresh yourself and your horse at one of the many fountains and drinking troughs that have been serving weary travellers since forever.

After around 5 hours in the saddle you’ll reach the head of the valley where your overnight in a traditional Ariège farmhouse awaits.

You’ll see to your horses needs and let them loose in the paddock before treating yourself to a good shower after your day in the saddle.

Marion will treat you to a delicious home-cooked evening meal created from fresh local produce. After breakfast you’ll head back out in the direction of the picturesque Bethmale valley, initially on paths and tracks with a descending profile, passing through the villages of Castillon-en-Couserans and Bordes-Uchentein, stopping to let the horses paddle in the river beside a pretty Romanesque church en route.

From there, your route takes you up towards a picturesque mountainside hamlet on the edge of the valley where you’ll find the peaceful guest house which will be your home for the night.

The guest house has a wonderful south-facing terrace with expansive mountain views which is the most perfect spot from which to unwind at the end of your day in the saddle.

Your host is renowned for his cooking and will provide you with a delicious evening meal created from local, seasonal produce. On your last day in the saddle, your return route to the Biros valley will take you through yet more picturesque traditional villages and on up to mountainside paths with more of those spectacular vistas of the high mountains.

Along the way and if weather permits, you may be able to visit the former pink marble quarry above the hamlet of Balacet which was at the heart of local industry from 1867 until 1977.

Imagine how on earth workers were able to move the 6 to 14 tonne blocks of marble from the quarry at 1215m altitude to the village below, without the mechanisation that we have today!

Once you’ve arrived back down in the valley, you’ll de-tack, brush and feed your trusty steed and then it will be time to say goodbye. A sad moment after 5 days in their company.

You’ll be transferred back down the valley to Marion’s B&B where you stayed during your trek and where you’ll spend your final night in the Ariège Pyrénées. After breakfast, it’s time to leave this beautiful area. You’ll be collected by taxi and transferred back to Toulouse for your onward journey home.

We hope you have had an unforgettable experience in the French Pyrenees, discovering places you would never find on a solo trip, and will come back to visit the mountains and the horses again soon.

Our horse riding holiday in the Ariege Pyrenees was an absolutely wonderful experience and I’m really grateful to you for all your help getting it just right. We had an amazing time and can’t thank you enough for putting it all together. It was s...

Our horse riding holiday in the Ariege Pyrenees was an absolutely wonderful experience and I’m really grateful to you for all your help getting it just right. We had an amazing time and can’t thank you enough for putting it all together. It was so special to have it all organised – and to be in the hands of such genuine local people at all stages – without the worry of language/money/logistics, worries which can seriously take the edge off a big holiday. And boy was this a big holiday. We have been places and seen things and shared experiences that I don’t think any of us will ever forget. (The children were in barely disguised tears saying goodbye to their horses.) Thank you SO much.

This multi day horse riding adventure takes place in the Couserans area of the Ariège Pyrénées in SW France.

Train – Toulouse Matabiau is the nearest main rail station (90 minutes) which has regular connections to towns in the Pyrenees foothills.

This trip is for intermediate level riders with a good level of riding fitness.
Accommodation is in shared rooms. No single room options. Participants will have individual beds but there may be more than 2 beds in rooms at certain accommodations.
The transfer is approximately 1 hour and 30 minutes.
You will be provided with a kit list upon booking. You will be expected to bring your own helmet and riding chaps. You should definitely pack wet weather gear as the weather in the mountains is unpredictable.
No, saddlebags will be provided for your day bags.
We would highly recommend bringing a soft bag.
THis trip is not suitable for children under the age of 14 years old.