On a week holiday in Turkey Jo met Murat – 12 years later they’re married and running yoga holidays in the very house that they met in!

Jo was a 25-year-old hairdresser running her own business in Bath, UK when she took her first real holiday to Side, Turkey.

There she stayed in a pension by the beach that Murat’s family ran, but it wasn’t until the last night of her holiday that Jo agreed to go on a date with him.

“After one hour we were totally smitten” Jo recalls.

Several months later Murat visited Jo in the UK but only two days after he arrived tragedy struck Jo and her family.

“Murat met my parents and then the next day my father was killed in a car crash. It was so hard and Murat was there for me through it all,” Jo said.

As well as support from Murat, Jo turned to yoga to work through her grief.

But it wasn’t until many years later that Jo truly fell in love with yoga – after getting married in Turkey, she and Murat were expecting their first child and Jo began anti-natal yoga classes.

“I finally learnt how to calm down and relax, it really changed me” Jo said.

Soon Jo was doing yoga any chance she could outside of her busy working schedule. But it wasn’t until her second child was born that Jo decided she’d had enough.

“I was shattered and I never saw the kids.  So one day I just put the house and my business on the market and told Murat I wanted to move to Side. As soon as we got here I knew it was the right choice,’’ Jo said. 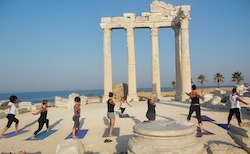 After completing several yoga training courses, Jo and Murat took over his family accommodation and they began running yoga holidays.

And with Murat’s knowledge and passion for the region and Jo’s love of yoga the holidays have been a huge hit.

“The best thing for me is seeing people arrive and they feel how I used to feel – totally stressed out from the 9 to 5, and then seeing the transformation at the end of the week is incredible,” Jo said.

The holidays are right beside the beach and the guests who are from all over the world come and go as they please. And with no single supplement the holiday is very popular among solo travellers.

“We always so welcoming and we’ve made some friends for life through the courses – there’s nothing else we want to be doing now.” Jo said.

Want to know more?
Get a glimpse into a day in the life of Jo
Discover Jo’s fantastic yoga holiday in Side, Turkey
Find out what Jo’s holidays are really like from recent guest reviews