What is aerial yoga and should you be trying it?

Aerial yoga, also known as AntiGravity yoga, is a relatively new addition to the world of yoga. Joining the likes of Bikram and Iyengar, aerial yoga entered the scene in just 2014.

We must admit, most images you see of aerial yoga can make it all look quite intimidating, especially for a beginner. But is it really as bad as we think? And are the benefits of aerial yoga so great that we should all be giving it a go?

We’ve taken a closer look at this new craze sweeping the yoga community so that you can decide for yourself – to try or not to try?

What exactly does aerial yoga involve?

We’ll hand this one over to the ever-useful Yogapedia…

“Aerial yoga is a type of yoga which uses a hammock or yoga swing to allow students to perform postures that they may not ordinarily be able to attempt on the yoga mat. It is often also referred to as AntiGravity® yoga. It combines traditional yoga with moves inspired by pilates, dance and acrobatics.”

Yogis will be guided through a series of poses while suspended a few feet in the air with the help of a hammock (more like a giant scarf ;-) ).

The idea is that the poses are actually easier to do in the air, using the hammock to take the pressure off your body and joints.

What are the benefits?

Just like any other style of yoga, aerial yoga is good for a variety of physical and mental elements. Including lowering blood pressure, relaxation, improving your mental health, strengthening your muscles and much more.

On top of that, aerial yoga is said to… 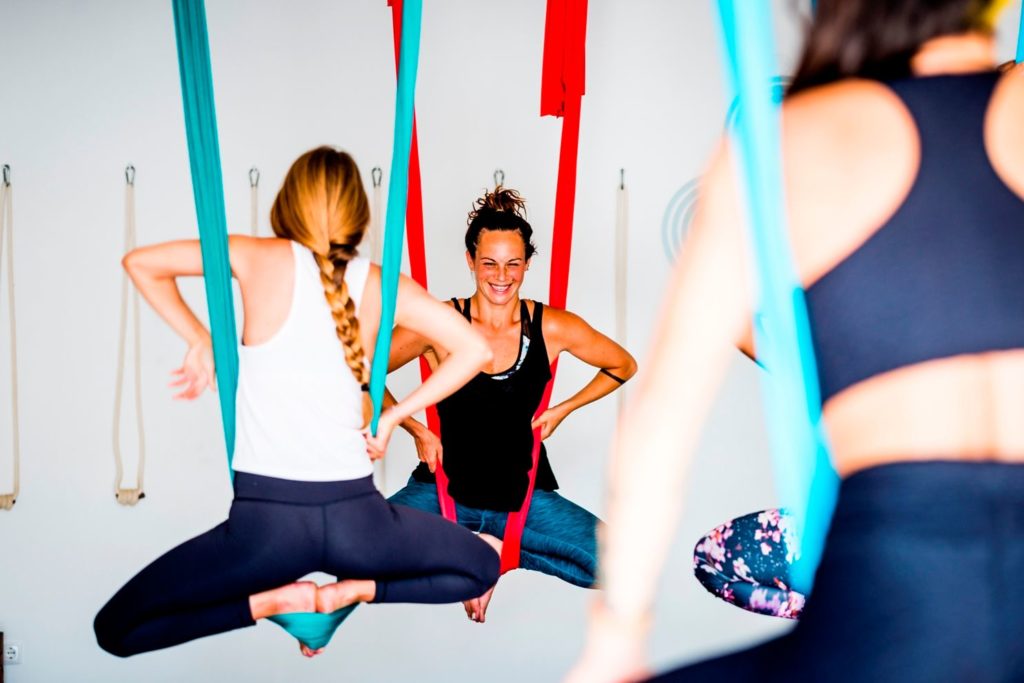 Is aerial yoga suitable for beginners?

You don’t need to have experience of yoga to try it, just be open-minded and try to relax.

It might be a good idea to give some ‘ground’ yoga a try first though. This will help you get used to the terminology and breathing before you also have to think about being suspended in the air!

Why hot join a local class or try a video on YouTube? We recommend Yoga with Adrienne on YouTube, her videos have something for everyone and are a great place to start for beginners.

However, please note that aerial yoga is not for everyone and pregnant women are advised against it. If you have any doubts about whether it is for you, please see a doctor first before you try it.

Where can I try it?

You should be able to find a specialised yoga studio near you that offers the right space and equipment, especially if you live in the bigger cities.

Or why not give it a go on your next holiday? Here at GoLearnTo, we offer aerial yoga lessons combined with surf in the Portuguese town of Ericeira on the Atlantic Coast.

Combining yoga with surfing is a great way to have fun and build your core strength and balance. Sounds like your kind of holiday? Find out more about this surf and aerial yoga holiday here.

What equipment do I need?

You should find that all the equipment, such as the hammocks and hooks, is provided for you. And don’t worry, it’s perfectly safe as the instructors don’t want you to hurt yourself.

So what do you think? Is aerial yoga something you would like to try?

In the NotInTheGuideBooksoffice, the jury’s still out. We’ve heard some great things about it but some have found it’s just not for them.

But as with most things in life, you’ll never know unless you try. So if you have tried yoga before, take it up a level and try something new.

Or if you would prefer to stick to yoga as you know it, we have some fantastic yoga holidays around the world for a holiday with a difference.