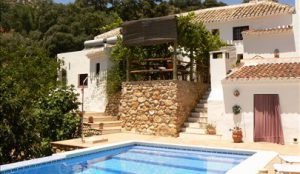 Every week, The Independent Newspaper invites competing companies to give us their best deal for a specified holiday. Today: a cookery holiday in southern Spain in mid-June. Prices are for two people travelling together.

Commences 13 June and includes six nights’ half board in a 19th-century finca, 12 hours’ tuition in the kitchen with a professional chef, and excursions to local olive oil and sherry producers. Travel to Spain is not included. “This charming, rustic finca set in the hills near the Parque Natural de La Sierra Subbética is the perfect setting to do as Jamie Oliver does and learn to cook authentic Spanish food using locally sourced ingredients,” says Vanessa Lenssen of NotInTheGuideBooks(+44 (0)208 144 5990; GoLearnTo.com ).

Look carefully at the article and one company is offering exactly the same package for twice the price… I know who I’d rather be booking through….!