Its all blood sweat and tears in Seville – Flamenco

GoLearnTo.com featured in The Telegraph on Sunday with its flamenco guitar, dance and Spanish language classes in Seville.

Travel writer, Christopher Middleton, couldn’t wait to find out what it was all about so headed to Seville to try his hand at all things flamenco – guitar, dance and song.

Here’s what he had to say about the experience…

“Walking through the front door of Seville’s most fashionable flamenco school, you can’t help feeling you’re in some kind of reality television show. In this one you will be attempting to transform yourself from someone who has mastered the “strum along book” of Beatles hits into a flamenco guitar master, through whose fingers gypsy passions throb.

I’m here for a week of instruction in all flamenco’s arts – guitar, dance and song (with the odd Spanish lesson thrown in). On day one, I attend a class which is the starting point for any aspiring flamenco artiste, namely compas y palmas. This means rhythm and clapping and sounds a bit of a doddle. How wrong can you be? Far from being easy, this session plunges me into the complexities of flamenco lore.

“Do you know the different palos, or styles of flamenco?” asks my teacher, Mariano, a brooding, ponytailed percussionist, who is a philosophy graduate as well as professional musician.

“There is the happy bulería style: we are here, we are alive, we will have fun. Then there is seguiriya: very tragic, hopeless, my mother has just died. And soleá, sad but not hopeless: my mother is ill but there is a chance she will live. Of course, there are many more styles.”

For all its sunshine-and-fiesta image, Seville is a city full of dark and sombre traditions; walk through its streets at midnight, and you come across vast cages full of straining, burly men, practising for the traditional Holy Week processions, at which they heave giant statues of the Virgin across the cobbles. Listen to flamenco, too, and you hear the sound not of sea and sangria, but of blood, sweat and tears. Which is why its practitioners take the music so seriously.

“Flamenco artistes do not like mistakes,” says Mariano, explaining how, in the flamenco pecking order, clappers come a long way below everyone else. “Believe me, you don’t want to be the one who claps when everyone else has stopped.”

Easier said than done, though, especially when faced with rules that stipulate that, in at least one of the styles, you have to clap specifically on the third, sixth, eighth, 10th and 12th beats. As if that wasn’t hard enough, most flamenco music is improvised, rather than written down, so there’s no predetermined point at which a song ends.

“You must listen for the llamada, or cry,” Mariano says. “It’s three loud beats, followed by the cerrado, or close, which is two loud beats, and that’s the end. In flamenco we give signals to each other through the music. No need to speak.”

His words are echoed by my guitar teacher Michele, whose laid-back demeanour belies the speed at which his fingers fly across the frets. “There is a structure to flamenco, a code, if you like, as in jazz,” he muses, stroking his goatee. “For example, when I start to play stronger on the guitar, I am sending a message to the singer, to say, ‘Are you ready?’ No need for words; once you’ve agreed what palo to play in, the rest takes care of itself.”

From an early point, it becomes clear that my haphazard twanging falls some way short of the disciplined technique that is required. But Michele asks how he can help me get what I want out of the course, to which I reply that I would like him to teach me some new chords that will sound all atmospheric and Spanish.

“No problem,” he smiles. “It’s a two-way thing. In any lesson I always learn something from my pupil.”

That evening, at a hall just off the vast Alameda de Hercules square, he and two other teachers put on a dramatic concert for the local cultural cognoscenti. While Michele plucks his guitar strings like a man possessed, wing-footed dancer Felipe Mato whirls and stamps in similarly possessed fashion, his heels pounding the stage like the hooves of a tethered thoroughbred. So carried away are the audience that a couple of them leap on stage to join in. 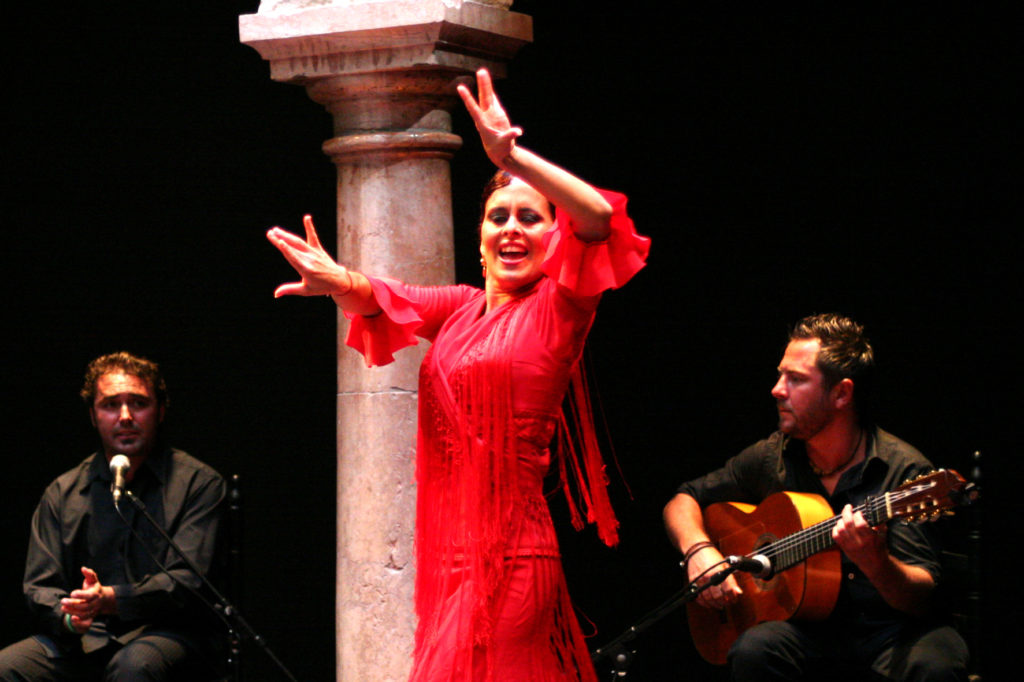 All pretty heady stuff, but, come the next morning, both Michele and Felipe are back at the school, taking beginners patiently through their paces. You can’t help wondering whether the two teachers mind this coming back down to earth.

“Not at all, they’re used to it,” says Eukene Izagirre, one of the school’s founders. “Besides, it’s part of a flamenco dancer’s life to pass on their knowledge.”

In fact, the majority of the students come not from Spain, but from England, Germany, Canada, even Tokyo (flamenco is big in Japan). Like me, they all leave the premises with a sprinkling of flamenco fairy dust on their shoulders.

Clearly, you can’t hope, over the course of just one week, to do anything other than scratch the surface of the parched Andalusian soil beneath which lie flamenco’s secrets. What you can do, though, by playing with and talking to the practitioners of this harsh, passionate and unforgiving art, is to take a break not just to Spain, but to another world.”

How can I book a flamenco holiday in Seville?

Book classes through GoLearnTo.com (0208 144 5990; www.golearnto.com). Choose from flamenco guitar lessons from one week, flamenco dance for both beginners and intermediates or even combine the skills with Spanish language lessons.

Optional accommodation can be provided in local apartments with Spanish locals so you get a real feel for the city and its culture. You will have your own room and share a bathroom and common spaces with your flatmates for the week.

What else can I see and do in Seville?

For a flavour of flamenco visit La Macarena, the old residential quarter in the city centre, home of Flamenco and parish of the Santisima Virgen de la Esperanza, whose weeping image resides in the yellow Macarena basilica.

Il Rinconcillo (www.elrinconcillo.es) is a bar, dating from 1670, with hams hanging from the ceiling.

Barrio Santa Cruz, the old Jewish Quarter, is home to the many tablas, or flamenco shows.

By far the classiest venue is the 18th-Century Casa de la Memoria (www.casadelamemoria.es), a Moorish palace.