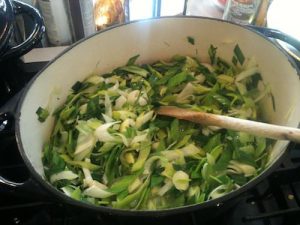 Dedicated foodie Helenka Bednar is recently returned from the NotInTheGuidebooks one day cooking course in Nice. Take a look at her review and the handy chef tips she learnt along the way featured in MSN Food and the foodie blog ILoveMyGrub.com.

How to inject French flair into your cooking
If you want to cook like the French, there’s one guaranteed way to get inspired…

What’s the best way to get a little French inspiration in the kitchen? Well head to France, surely. So that’s exactly what I did on Monday. I hopped on a plane to Nice for an afternoon’s cookery course and got fully immersed in whipping up a three-course meal, French-style. After catching a morning flight to Nice, I landed in time to root around the flea market and fill up on butter-laden patisserie, before heading off for an afternoon’s cooking with chef Aude, whose cookery school is based in Nice.

It’s difficult not to get inspired by a good cookery class. All six of us started salivating over the ingredients when we arrived (which intensified when we got to the chocolate dessert stage). Aude (pictured above) got us cutting, chopping and sculpting rose-shaped tomatoes (pictured), whilst she fried, whisked and whipped our three-course meal into shape. Collectively, we rustled up the following French show-stopper of a dinner, which we got to tuck into with a bottle of wine once all our hard work was complete:

If there’s one thing I love about French cooking, it’s the amount of cream you get to consume. Incidentally, our chef Aude added cream to most of the courses that we cooked, without so much as flinching. ”But you’re so slim!” said one of the girls in the class incredulously. Aude’s reply? A simple French shrug. As if to say “but the cream, it is good for you, non?”

This is why you’ve got to love the French. If a mere slip of a woman can eat cream that regularly and stay slim, it’s got to be worth cooking from scratch. I can’t help thinking after Aude emphasised the importance of cooking each ingredient to retain its nutritional value and goodness, that proper home cooking allows you a little more leeway with your cream quota. That’s my rationale anyway.

How to cook with French flair: