At last – the cookery class for junk food addicts 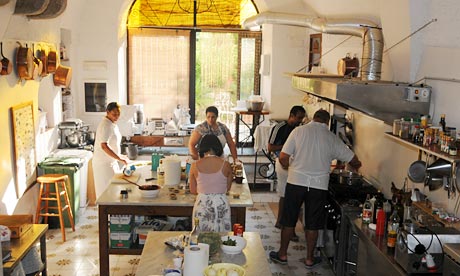 “A break-up is never easy, but when your boyfriend is a chef there’s another, more immediate problem: who’s going to do the cooking now? I’ve been on my share of cookery courses over the years but, although I’ve enjoyed the classes, I have never been inspired to make any of the dishes back home: too complicated, too “cheffy”. I love food, but not cooking. One of the advantages of dating a chef …

After the post-split period of appetite loss and disconsolate picking at your food, the comfort eating kicks in. So when I heard about an ice cream and pizza-making course in Italy (learn to cook junk food – how fabulous is that?) I ditched the tissues, licked my lips and booked a flight to Naples.

Of course, in Italy ice cream and pizza aren’t junk food. The Italians use only the freshest ingredients and make everything from scratch – no soggy pizza bases from the supermarket deep-freeze. This was going to be the perfect combination: quick-fix food that was also healthy and delicious. Even the name of the cookery school, Mami Camilla, sounded comforting: like a big welcoming hug from a chubby-armed Italian mamma.

Camilla is, indeed, an Italian mamma and wife to Biagio Longo, a giant teddy bear of a chef who has worked all over the world – Belgium, England, South America, the US – and had his own restaurants in Naples and Sorrento. Mami Camilla is a family business and the four children, Agostino, Giuseppe, Odilia and Laura, all squabble, laugh and work together.

The cookery school and rambling B&B is in the old family home in Sorrento, a hair-raising hour down the coast from Naples, unless Luigi, Laura’s sensible, young engineer-student boyfriend – and my taxi driver for the day – is driving. Everyone gets roped in. The sprawling white-washed building surrounded by lemon trees laden with fruit was once an olive oil factory. In the whitewashed, barrel-vaulted kitchen, festooned with copper pots, you can still see the clay pipes coming out of the ceiling. The olives were crushed in the room above and the oil drizzled down into huge barrels.

Pulling up outside the green gates, I could hear laughter drifting from the garden. Family, boyfriends, girlfriends, friends, children and general hangers-on, were sitting around a huge wooden table tucking into a rowdy Sunday lunch. “Are you hungry?” Agostino asked as we clattered up the old stone steps to my room. Is the pope Catholic?

The two-day ice-cream and pizza course is just one of a number of options offered here which range from one-day Italian cookery tasters (popular with Sorrento’s posh hotel crowd) to three-month internships where students study at the school and then work for a month or so at a restaurant in town. The people you meet at breakfast might be students from US cordon bleu schools, backpackers staying at the B&B or fellow cookery mini-breakers.

The next morning we started with pizza. Normally there would be up to nine students in the class, but I lucked out the week I was there and had Biagio to myself. He dumped a kilo of flour (plus yeast, salt and sugar) on the marble-topped island in the middle of the kitchen and made a hole in the centre with his huge fist.

“The pizza in Naples is the best in the world. It’s made with a sourdough starter, rather than with yeast, so it’s lighter on the stomach. However, you have to cook it in a wood-fired oven at around 500C.” If you don’t happen to have a huge brick oven in your garden it is still possible to make good pizza in a conventional oven, using yeast, and Biagio was going to show us how.

He poured water into the hole he had made in the heap of flour and started mixing it all together. I measured out my ingredients and did the same. As the water soaked up the flour mixture we began kneading, pummelling and slapping the dough around. It was better than therapy.

“Now we leave it for half an hour to rise. Come.” Time for a quick cappuccino in the sun. I was starting to think that I was on a crash course in the art of Italian living rather than at a cookery school. I sipped a creamy coffee, listening to the hum of scooters and the twittering of birds in the lemon trees, while Spike, the family dog, lay spread-eagled at my feet.

Half an hour later the dough had risen into a springy dome, Biagio had taken an SOS call from his pregnant daughter, Odilia, who had broken down on the autopista to Rome, and Agostino, the 36-year-old Italian stallion, had taken over the pizza class. Life’s a bitch.

Dividing the dough into sections we rolled mini pizza balls, then flattened them on the marble worktop before pulling them into shape with our fingers. For the larger pizzas we threw the dough from one hand to the other, stretching it out. The topping, whole canned tomatoes in a bowl with salt, pepper and a sprinkling of sugar, we squelched together with our fingers. It was satisfying in a sensual, childlike, deeply mucky way. Smoothing it onto the pizza bases we added mozzarella, capers, olives, peppers, sun-dried tomatoes, anchovies. While the pizzas were cooking Agostino taught me to make a southern Italian speciality, casatiello.

Smearing a large pizza base with olive oil, we sprinkled on mozzarella, chopped salami and Parma ham. We rolled the pizza into a sausage, curled it round a tin and shoved it in the oven.

“They deep-fry the pizza in Scotland,” I told Agostino, wiping my hands. “They used to deep-fry the base in Italy,” he replied. “You can see it in a film classic set in Sorrento in the 50s, with Sophia Loren. ‘Pane, Amore e … ‘ [Bread, Love and …] .” Says it all. Somehow Sophia Loren frying pizza in Italy seems OK in a way that the Glaswegian version doesn’t.

Agostino pulled the sizzling pizzas out of the oven and called his family to the table for lunch. A carafe of wine, an avocado salad quickly rustled up and we tucked into the best pizza in the world. Sorry Naples.

Day 2: gelato. “Ice-cream,” Biagio had told me, “was invented by the Arabs in Sicily. It’s simple – milk, sugar and eggs plus whatever flavour you want to add to the mix.”

Biagio’s mother was a pastry chef who owned a little bar and bought her first ice-cream machine in 1948. Even the cheapest machine in Italy costs around €3,000, he told me. So although we would be making ice-cream, Agostino would also teach me how to make a semi-freddo or half-frozen dessert which anyone can make at home without any expensive equipment.

But first, gelato. I stirred the milk, egg and sugar mixture on the stove until it was just about to boil. Then we left it to cool. The flavouring, a rich pistachio paste, was added next and then the mixture was tipped into the ice-cream machine. Eight minutes later, gelato was oozing out in soft, creamy waves. We also made vanilla ice-cream. And strawberry with fruit straight from the market. Three thousand euros suddenly seemed a sensible investment.

But we still had to make the semi-freddo. Whip equal amounts of egg white and sugar until stiff. Then whip up a bowl of cream, and stir sugar in a copper pan on the stove until it caramelises. Add hazelnuts to the caramel and pour the molten mixture on to the marble surface to cool (make sure you put oil on the surface to stop it sticking). Blend the cooled caramelised nuts. Mix together the whipped cream, egg whites, crushed nuts and a spoonful of toffee, spoon into pots and stick in the freezer for a few hours. Lick the bowl.

“So where can you find the best ice-cream in Sorrento?” I asked the Italian stallion. “Gelateria Davide. I’ll take you there later on my scooter.”

As break-up remedies go it doesn’t get much better than that.”

Essentials
Go Learn To (0844 502 0445; GoLearnTo.com) offers Pizza, Pasta and Gelato courses until 21 September at Mami Camilla. A two-day course costs £198 per person. Bed and breakfast accommodation costs from £38 a night for a  single room – stay as long as you like or add on additional cookery lessons from £98