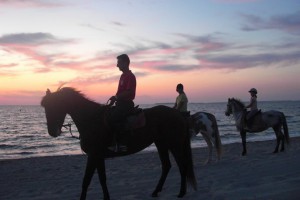 Learning holidays have shown impressive resistance to tough trading conditions by increasing in popularity while package holidays and the travel industry are in general decline.

The growing trend for holidays that educate as well as entertain has seen millions jet off to Europe and further afield to learn a new language, master a cuisine and immerse themselves in yoga or dance.

Package holiday and budget travel operators, on the other hand, have seen revenues decline, with Thomas Cook reporting an operating loss of £26.5million for the third quarter of 2012, while Ryanair recorded a drop in profits of almost 30% between April and July.

“Combining lessons with leisure really makes for a holiday with a difference. Spending part of each day immersing yourself in learning something new gives your holiday structure, and allows you to truly discover your destination whether you are in Buenos Aires, Biarritz or Barcelona.” says Lenssen.

With programmes like Masterchef and the Great British Bake Off raising the cultural prominence of cooking, it is no surprise that cookery holidays are among the most popular getaways.

But there is increased interest in a wide variety of courses, including photography, painting, yoga, Pilates, surfing, perfume making and horse riding.

Add to that the burgeoning popularity for language holidays, and it appears the traditional image of British holiday makers lounging by the beach and pool, demanding British food and overdoing it on the local lager is in need of revision.

Indeed, the shift has been in full swing since 2009, when figures compiled by Mintel revealed 36% of adults saw actively educating themselves about their destination as an important part of their holiday and the Centre of Future Studies revealed that learning holidays was to become the fastest growing market niche.

To complement a widespread taste for ‘softer’ learning, by 2009 over 9% had learnt a new language on holiday and 13% a new skill be it yoga, painting or jewellery making to name but a few.

In addition, 5% of holiday goers favoured breaks involving ‘harder’ learning activities like languages or surfing, and around 25% of respondents said they would like to learn a new skill on holiday in the future.

Commentators have proposed a number of reasons for the growth of learning holidays, from the rise of solos holidays, to the effect of the recession and the satisfaction of learning over lazing on a sun lounger.

What’s clear is learning holidays offer the best of both worlds: the chance to learn new skills and attain longed-for talents while at the same time soaking up the sights, sounds and smells of some of the world’s most spectacular destinations.

GoLearnTo.com aims to be the pre-eminent learning holidays provider and with well over 1000 courses in over 35 countries across the globe and new courses added each week, it’s the go to website for those who want to be part of the growing trend in travel.