It is a rare day in Seville when the sun doesn’t shine. With sub-tropical climate giving an average daily temperature of 25 degrees and orange trees lining the cobbled streets, it is obvious why Seville is a top tourist location.

Don’t be fooled. Behind the facade of delicious, diverse tapas and great wine lies a history of scandal, war and a rebellious underground movement. The stunning middle eastern architecture throughout the city is all that remains of the bloody invasian of the Arabian Moors. 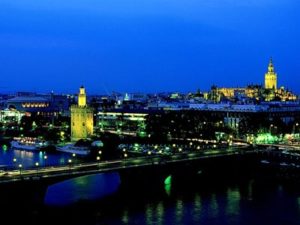 Hundreds of years later, at the fall of the Moorish empire, Flamenco guitar was born. It is the music of struggle, desperation and hope. It remains a a symbol for the Sevillian people of defiance against oppression.

Sitting on the terrace today, with a glass of rioja in one hand and the blue sky overhead the sound of flamenco drifts through the streets. A musical reminder of the fire inside the Andalucians, which can be seen on the dance floor as well as the battle field.