Warning! 10 side effects of swine flu 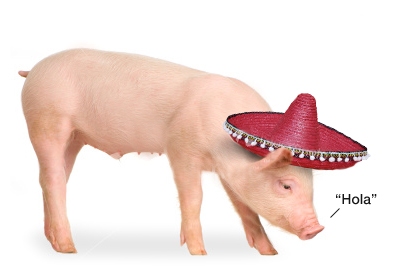 The ongoing swine flu pandemic has produced some unpredicted side effects. Here we shed light on some of the less talked about aspects of the crisis:

Mexican restaurants packed out – As a result of the publicity surrounding the outbreak in Mexico and with many holiday makers forced to cancel their dream trips as airlines aren’t flying; many of us are choosing to get a flavour of Central America by munching on Mexican. Pedro from Casa Mexicana said “we thought swine flu could be the end of us but things couldn’t be better!”

Surge in demand for Pilates courses – Concerned individuals are putting their faith in Yoga and Pilates to ensure they survive the swine flu pandemic. NotInTheGuideBookshas seen an increase in enquiries for wellbeing holidays since the onset of the flu.

Shares in Roche Holding up 10% – Roche Holdings, the manufacturers of Tamiflu are predicted to do well out of the current pig flu outbreak. With Tamiflu the drug of choice to combat the killer flu profits look set to soar. Factory workers are working round the clock to meet unprecedented demand.

Gas masks back in vogue – with surgical masks proven to work for short periods only; WWII gas masks are back in. These durable devices can keep out all sorts of unwanted microbes and viruses. Grannies are being asked to loot through their lofts for these sturdy contraptions.

Eastenders’ Chops faces the chop – Well loved porcine member of the Eastenders cast faces the axe as producers are worried her appearance may cause distress for cast members catching the fast-spreading virus. Laila Morse, who plays Mo Harris is pleased about the decision as friends say she hates animals and won’t miss Chops’ repugnant reek.

Sales of travel insurance up 300% – Concerns about the threat of a swine flu pandemic have led to a soar in the number of bookings for travel insurance. Insurance providers have seen a 300% increase in bookings since cases of swine flu were first reported in Mexico.

Supermarkets threaten to sue the Mexican Government over loss of pork sales – Supermarket giants worldwide are considering a class action lawsuit over the loss of sales for pork products. Pork sales have plummeted since the start of outbreak as consumers worry about catching the killer flu. Austrian supermarkets are particularly concerned.

Mexican Waves banned – Out of respect for the victims of the deadly flu virus; Mexican Waves have been banned from all sporting events until further notice. The 2012 Olympic Committee has convened an emergency meeting to discuss a resolution to the crisis.

Children refusing to save money – Terrified children are refusing to use piggy banks over fears they will catch killer pig virus.