Solo surf holidays: your first will not be your last 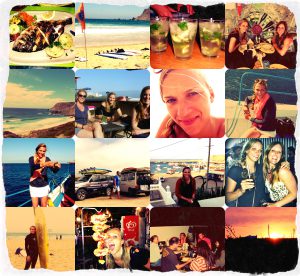 “I have had an amazing surf holiday. I met some nice people and I hope I will meet them again in the future. If I get the opportunity I will go back!!”

Last year, Milou did bodyboarding at Sagres. She looked at the surfers catching the waves and she thought, “I want to try that once.”

This year, Milou returned to Sagres on our surf holiday. She joined the surfers catching the waves and she thought, “I’ll be back!”

Milou loves Sagres. The people. The atmosphere. The sea, the beaches, the food. The crazy nights out. The days at the beach with the surf lessons and chill out moments. 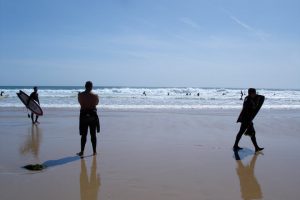 Surfers the world over are sociable types and in Sagres, the laid-back vibe, the great beaches and the warm sun make for happy, sociable surfers.

“All the people were really relaxed and nice to hang out with. They were spontaneous and interested in meeting new people. Because of that, there was a nice vibe in the house.”

Milou stayed in the surf house in a mixed-sex dorm room. The accommodation, though basic, is designed for maximum socialising among guests. Hang out at the BBQ area. Bond over cooking in the kitchen. Enjoy a beer in the garden, watching the waves.

I did it. I travelled solo for the first time.

“The best thing about travelling solo is being able to do what you want with who you want. I liked the freedom a lot.”

“This was my first time travelling solo, but definitely not the last time!”

About 80% of our guests at GoLearnTo.com travel solo and Milou’s not the first to tell us that. The freedom offered by solo travel is addictive.

“The best thing about travelling solo is the freedom to change plans as you go along.” – Hear from Mike, another of our independent travellers who is a fan of solo travel. 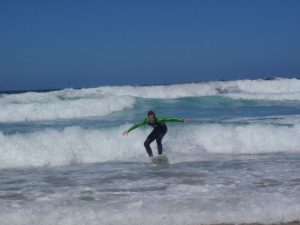 From Milou to those considering this holiday: “If you like the waves, have the interest and motivation to learn surfing and want to relax after that, this is definitely worth it! It’s a great experience, even if you do it solo.”

Milou’s hooked. On Sagres. On independent travel. Who knows whom you might meet on your next holiday.