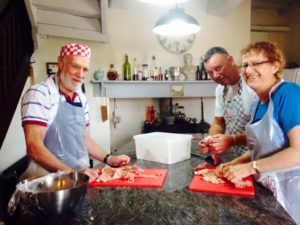 After returning from our week cooking course in Gascony, William of Edinburgh was so inspired he wanted to share his experience with everyone. See the entertaining and detailed account of his holiday discovery below…

So, about my French cookery course. Where do I start? Going on this particular course was something completely new for me.

Even during the very first evening, I kinda felt that I had walked through an archway and into a place that was like a new garden, so to speak. Full of interest.

This was partly due to the location of the place. The building that housed the school, in Gramont, Gascony, had been entirely rebuilt by the English owner (David) and his wife, Vikki, who bought it about 10 years ago. It had been deserted and in ruins for many years as farm buildings, although the full history is not known. Except that it is one hell of an age, and many of the beams and stonework has been taken from what was left after re-modelling a pretty big chateau, which in itself was previously dilapidated. By old, I mean 13th century. The whole village is medieval. Now completely protected by the authorities. 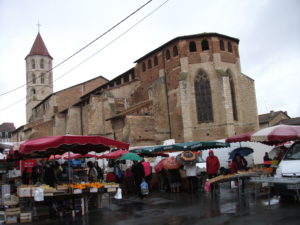 The views looking out from the school are fantastic. The village is on top of a hill, and one could see for miles; the area is renowned for its sunflowers. Fields and fields of them, and when the flowers are blooming, it’s like a great patchwork quilt of these huge yellow flowers. When working in the kitchen, I could step out the door, and the whole countryside, with these views, was then in front of me. In fact, although the weather wasn’t at its hottest, at night I slept with the window and shutters wide open. The fresh country air was great for peaceful and relaxed dreamtime.

Part of the deal included being taken on an afternoon tour by David to visit 4 or 5 chateaux in the surrounding area. Most of which, along with their bunch of houses around them, are on the top of a hill. That trip was let us see a bit of the countryside and aspects of the local history; it was apparent that David had researched the area to no small degree. It was a break from wearing a pinnie (apron), and having a bloody big chef’s knife ‘in aboot’ the kitchen worktop. 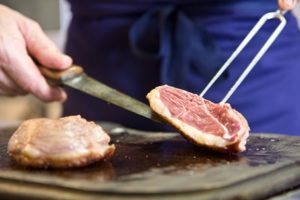 One morning we were taken to a local farmer’s market, having each been given a shopping list, a tote bag woven out of reeds and grass, and a wee purse of money. This was to allow us the experience of a traditional market, and to buy a bunch of fresh vegies and things with which to make the evening’s meal. It was pretty good, dodging around the stalls, finding what we had been told to buy, and doing ‘the business’, as they say. It’s quite acceptable to have a feely-touchy of the fruit or veg that one wants to buy, and the stall-owner would then weigh it and tell us how much. And the locals had not much in the way of English. The day was spoiled, a bit, as it was pouring buckets all the time. But lots of fun, sticking our (figurative) noses into the fruit and veg stalls. Incidentally, whilst the weather in general was fine, it did rain a couple of days; the previous week the temperature was in the 30’s. That would have been seriously hot in the kitchen.

A couple of times for lunch, we went to the nearby auberge; Benard, the owner and chef, being in cahoots with David at the cooking school. Bernard was very much into traditional local-type food, and we had a couple of sessions in his kitchen. In the auberge we made crepe suzette, a huge big cassoulet, and a bunch of deserts such as crème caramel, and chocolate mousse.

We also prepared foie gras This is the liver of a force-fed goose and foie gras is considered a delicacy, and a damned expensive one at that. A premium quality goose liver is in the order of 50 euros a kilo, and a plate of foie gras, as a starter and with only three thin slices on the plate in a London restaurant, would set you back 30 quid. Foie gras is very much a specialist delicacy in the area, as is in the rest of France, and is treated with some reverence.

It was quite a privilege that part of the course was in the auberge’s kitchen, doing our thing, under the close supervision and guidance of the genial Bernard. 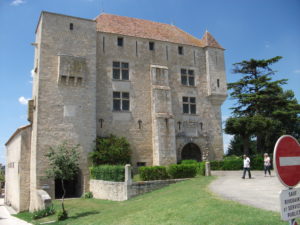 When in the cooking school itself, we were first shown, and then we were required to : skin and fillet a plaice, : completely de-bone a chicken and stuff for going into the oven (ballotine de poulet) : make a couple of classical French tarts : learn how to ‘spin’ sugar : correctly cook duck breast so that it always comes out perfectly : prepare and steam an artichoke : and, and….

The meals were proceeded with an aperitif – or two – copious wine with the meal, and for some reason it was generally rose/, with a digestife, generally Armagnac, to finish with. All the drink was compris (included in the overall price of the course). With regard to the wine, there was no fuss, no studying of wine bottle labels or learned discussion thereof; no formality. The wine was decanted and simply placed on the table. In line, I suppose, with the traditional, honest, but carefully prepared meals that we ‘plated-up’. What Dave taught us was to the highest standard of French cooking, from ‘scratch’.

All this meant that both lunch and the evening meal comprised three courses, plus cheese (always served before the pud!). Foie gras is very rich, and coupled with the auberge’s unique nettle and green pea soup which we had at lunch, I was pleased my tum just about managed the potential assault of so much food. Nevertheless after a couple of days, most of us felt that were a trifle well-stuffed.

Breakfast was ‘continental’ – thank goodness – and I went with Dave a couple of times first thing in the morning, to pick up the day’s croissants and French sticks. Continental the breakfast was, perhaps, but Vikki had it beautifully laid out. There was rather good cereal with nuts and things, dishes of fresh strawberries, plates of fresh fruit salad, Gouda cheese, sliced ham, home-made jams and marmalade, yoghurt, honey, pain au chocolate, coffee in cafetières, and tea in proper china tea pots… the whole bit. Mmmm. I was biting into a beautiful big and juice strawberry, with the juice running down my chin, which then dripped on to my white cotton trousers. The stain is still there; a souvenir. 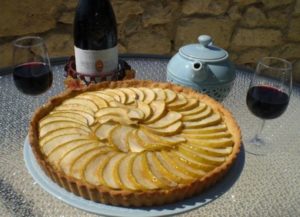 I was surprised there were only five students on this particular week. A mixed bunch: an American girl, a girl from Japan, a girl from somewhere around Portsmouth, and a retired lady doctor from New Zealand. And myself, a Scot, of indeterminate years.

Between six or eight is the normal number for the week, and if there are more, the class is split into two, alternating between the school and the auberge. Dave, and Vikki of course, spoke English – and French – and the course was in English. Over in the auberge there was a good bit of French spoken. I was more than a little surprised when realised I had the best knowledge of French in our group of student…. which didn’t say very much for the rest of them. And that’s me leaving school 50-something years ago.

Dave is a superb professional, with knowledge, patience and good humour, and Vikki is a lovely lady, with a bubbly personality and a real east-end (of London) accent. There was great ambiance throughout the course, around the slab of marble that was the worktop, and around huge 3-inch thick plank of oak, – about 16ft long – which comprised the outside table.

Every aspect of the holiday was in consideration of the students. This said, there was no sloppiness in the kitchen, with particular emphasis on hygiene, cleanliness,…. and the handling and management of the razor-sharp knives.