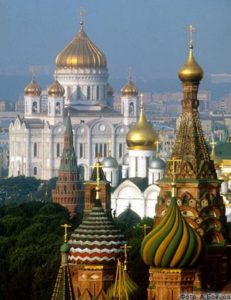 Fancy challenges? Like learning something new and unusual? Why not learn a bit of Russian, one of the most difficult languages for an English-speaker to master. Besides, nowadays Russian is becoming a quite useful language to know with all that economic development of the post-soviet states. Did you know that English-speakers may get about 4% extra on top of their wage for knowing Russian? So, if you do like challenges, a rise in salary sounds tempting and you consider yourself a fan of Tolstoy, Gogol or Pasternak than it is definitely something for you.

That should be enough for the start, but if you wish to learn more why not go to Russia itself on our Russian language course in Moscow or Saint Petersburg . You will immerse yourself completely in the unusual culture of this country, experience the welcoming character of the people and learn the language in a professional language school to be able to communicate on a day-to-day basis.