Guest review: Patricia develops her painting skills on her 1-on-1 holiday

Patricia is a Canadian native, and now spends her time between England and Canada; while managing to take a few good holidays in between. Neither a beginner nor a professional painter, painting is a hobby Patricia loves to pursue in her free time, along with her passion for travel.

One of Patricia’s holidays took her to Cyprus for our painting holiday. Being the only one there for painting, we really wanted to hear what this 1 on 1 experience was like, as Patricia has been on a group painting holidays before so we were keen to find out what it was like to be the only one in the group and how it helped her painting skills and techniques develop.

Why did you choose this painting holiday?

I was looking on the internet for a painting holiday, preferably in the sun, in a place I’d never been to. The end of March was the only time I could get away. It was off season and nothing seemed to be available, but GoLearnTo.com came up with a trip in Cyprus, which met all the criteria!

Who else was on the holiday?

I was surprised to find I was the only one but immediately saw it as a great opportunity to improve my art skills! Although I love painting with a group, one can’t beat one-on-one tuition.

Most of the week I was virtually the only guest in the hotel and restaurant due to the off season though did meet some expats. The town itself was quiet when I was there but tourists were starting to arrive just as I was leaving. 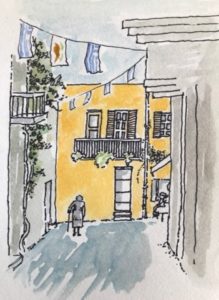 Tuition was excellent. The live-in tutor Aylin was away, so Georgia and Anna took it in turns to take me to various ‘en plein air’ locations. I did watercolours by the windswept sea, trees in an olive plantation and we went up into the Troodos mountains where I painted the wonderful vista of Lefkara and its orange rooftops.

We also spent time in the well-equipped studio right next to the hotel. It was great that materials were provided! Both tutors pushed my boundaries by encouraging me to complete two large oil paintings. I must point out that I had a background in graphic design and photography and have taken various courses over the years, so I’m neither a beginner or advanced…but somewhere in between.

How’s the area for creative inspiration?

I’ve always felt drawn to the Mediterranean countries; especially Greece, its people, its climate and its history, so I loved the small part of Cyprus that I saw. Lefkara is the oldest village on the island and is hilly and picturesque with a beautiful old church, narrow, cobbled streets and ancient crumbling walls on some of the buildings. Lefkara was well known for its lace making industry and the tradition is still continued by some. Lefkara is nestled in the Troodos 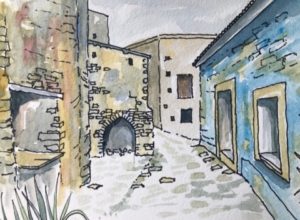 mountains and from the top of the hills one can see for miles.

I was very inspired by the ancient Cypriot buildings and landscape – very different from where I live (currently dividing my time between England and Vancouver, Canada).

However, there is a downside: Cyprus is a divided country with Greek and Turks who don’t like each other, and there is a huge amount of foreign ownership including a large Russian population. But I was there to paint – not get into politics!

How was the accommodation?

The hotel (and my room) had character, was clean, safe and comfortable and had WiFi. The dining room was large and with a basic interior, but I think they may have plans to improve the ambiance. There was an adjoining terrace overlooking the street where one could dine alfresco. Apparently, it gets very busy in the tourist season.

What did you think of your hosts and painting tutors?

The hosts couldn’t have been more helpful and hospitable. Colin welcomed me at the airport and explained the itinerary for the week. He introduced me to Ali and his wife Helena who manage the hotel. Ali was an amazing cook and went out of his way to personally cook whatever I wanted. He came up with a different dish each day including traditional Cypriot food. Everything was delicious and accompanied with plenty of local wine! 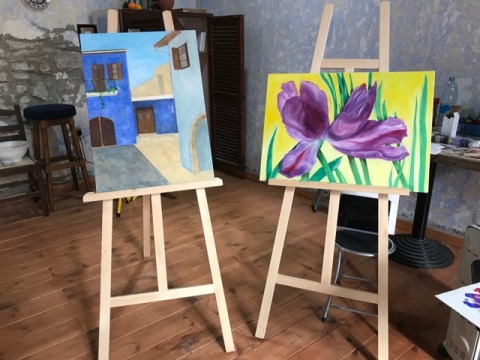 What advice would you give to other solo travellers?

My advice to a solo traveller who wants to paint is to join a group for your first time! I’ve done this twice (Norway and Canada), and it’s great to meet people with the same interests. It also doesn’t matter how much or little experience one has had. Everyone’s style is unique to them which is interesting. Also a good tutor is able to teach any and all levels. For the more experienced traveller who wants to get the most out of tuition, being the only one will get you out of your boundaries and can push you into new mediums and ideas so don’t be put off if you are the only one.

Are you feeling inspired by Patricia’s learning holiday experience? Find out more about her painting holiday in Cyprus here.

Or feel free to browse our full range of painting holidays here.