‘I am from a village outside Scarborough (in the sticks). I get the mickey taken out of the way I speak here, I have never read more than the first page of a book, and I only went for the cooking. The language was a scream, it’s a must, I would even book the right airport next time (another story!!)’

When we received Grahame’s feedback from his recent Beginners Italian And Cooking Course in Florence, the whole office was in stiches and we were desperate to find out more about his learning experience! Luckily for us, Grahame was happy to provide more details, read about his time in Florence below:

“I am not your organised man as my wife and children will tell you, I do everything without thinking.

My letter writing is as good as my reading so you just try and keep up! I decided I needed a holiday as I never take them so my wife and my eldest said they would sort it out, but I said no, I would sort my own holiday out. However it never happened and 2 years later I had a bit of time spare so I got the details of an Italian cookery course in Florence a 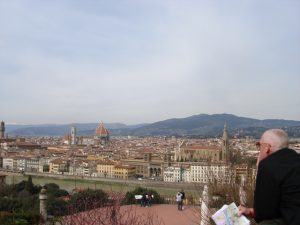 nd my wife and eldest then followed this up and booked it for me as well as a hotel nearby to the language school.

All that what was left to do was to book the flight to Florence (can’t be that hard) so I booked it. I even got a direct train to and from Scarborough to Manchester airport, which was smarter than the average.

I got the train then got the flight no problem, got off plane, got my luggage, and beat everyone to the taxi rank. I then showed the taxi driver the address of my hotel as my wife had written everything down (hotel address, emergency numbers, and the rest). The taxi driver looked at the address and off we went.

After 15 minutes, I rang my wife and eldest as they said it should be a 6 minute ride by taxi from the airport… I told the taxi driver to pull over – he was having my eyes out, driving around on my money – not daft this kid! I asked him how much longer he was thinking of taking the mickey out of me and he asked for the address to be showed again and all he kept saying was ‘Firenze’. All I kept saying was ‘yes, Florence and its 6 minutes from the airport’.

After a few choice words, he rang another driver who spoke English well and he explained I had got a flight to Florence… but not the airport I should of done! Billy idiot here had taken it for granted that it was the right airport, but oh no, I landed at Pisa!

There was still 94 km to go and I felt like I had furry ears on my head all the way to Firenze. When we got to Firenze, the driver asked another taxi where my hotel was and then fell about laughing as the taxi meter was on 166 Euros. He then went and took the case out of the boot outside the hotel and I paid him and said no tip senoire!!

I got up early Monday morning to check the start times for the cookery and language course, but I forgot to put the address down on, and my laptop would not work as I don`t understand them. So I then waited until 9am English time to ring NotInTheGuideBooksto find out the address of the language school, which meant it was then 10am in Italy and the course started at 9am… I eventually found the language school after 50 minutes of wandering round, so in the end it was not 5 minutes’ walk from the hotel!

Anyway I got there and the lady at the desk said come back in 20 minutes as it was half way through the lesson, so I just went to the bottom of the stairs as I dare not go any further.

I then met my class mates and teacher Frederica (spelt wrong obviously) and my new friends – 3 German’s and an Austrian. We really hit it off as the German man called Lutz was better than me at speaking Italian but not too far advanced, and we finished at 1pm that day.

I found my way to the hotel and back again the following day, and Lutz and I got talking and he too was going to the cookery class at 6:30pm on the Tuesday. Made up that I had a new friend and someone to have a laugh with at the cookery class, I went to meet him at the cookery course of which is over the river in the other direction. He asked if I wanted to meet them and walk with them but I said I have some work from home to sort out and I would see them there at about 6:15pm.

Oh yes, Billy idiot turns up looking so forward to cooking Italian style only to find my course was at 1:30pm, not 6:30pm! (Madness I know but that’s me).

I went to the language school every morning for 4 hours, visited Sienna with Lutz and a German lady called Anja, and we were able to see how the Chiante classico was made stored and bottled, had a good taste of 8 different wines (well you have just got to it would be rude not to.)

I went out with the people on the course for meals on a night and also finally got to the cookery lesson on time Thursday enjoyed it a lot.

On the Thursday night we went to a restaurant called Zio GiGi where the head waiter would sing songs and make people happy when they were having their meal, so we enjoyed it that much the whole class booked a table for the last night. Sadly there was no singing waiter, so oh yes, after 4 draft bears and a bottle of the vino rosso I learned those words, and Lutz and me sang ‘That’s Amore’ Dean Martin style with the ladies as backing singers. It was that bad it was good.

To sum up my week away, I went for the cookery course. The language element was just something I thought if I could come home and go to our favourite Italian restaurant and know a few words to have a laugh with Alberto that would be a bonus. But if I’m honest the Italian lessons were a scream from start to finish and also educational even to a man like me. Ciao people and get yourself there, it’s worth every penny (except the taxi drive, I bet he does not forget me, the English furry eared man!)”

Have you been inspired by Grahame’s story? Find out more about our Italian language courses on the NotInTheGuidBooks.com website today