A city named after a fruit

Did you know the city of Granada in Andalucía, Spain was named after the pomegranate fruit? In fact, it is the city’s emblem! No wonder it has become a important ingredient on our cookery holidays in Spain.

Native to Persia, this fashionable fruit with its high levels of antioxidant, vitamins B, C & E is naturally suited to cool winters and hot summers but can thrive pretty much anywhere from Spain to China.

Scientists have found eating pomegranate can fight against the hardening of the arteries and diseases such as heart attacks and strokes. In Eastern healing practices, the skin and leaves are used to cure a range of illnesses.

There are many ways to enjoy the pomegranate fruit. The juice can be consumed as a fresh fruit juice, to make sorbets, ice-creams, jellies, relishes, vinegar, sweet or savoury sauces, cold or hot. It can be made into wine or the dried juice sacs of the fruit are used as spices in northern India. 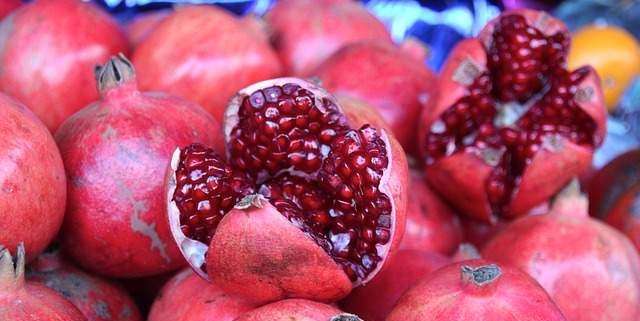 This clever health kick of a fruit is even more useful in Spain. The winter in Andalusia is cooler and although the days are sunny with temperatures reaching 20°C, it can get seriously chilly at night.

At the cooking school in Andalucía, Spain there are a variety of fruits trees on the Finca land, such as red and yellow plums, apricot, red and yellow peaches and figs but in winter, fresh fruits can be very scarce. So apart from the fruits and nuts that are dried during August and September, it’s necessary to prepare for the colder months and the pomegranate is the perfect solution.

Pomegranates are picked during October and November to beat 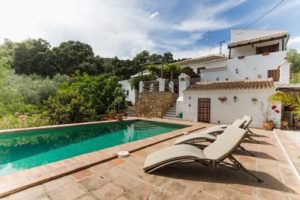 the birds. Usually when the skins of the fruit start to turn red, they are not quite ready to eat, but for preserving for winter, the round closed ones are perfect to pick. After picking, they are hung in a cool dry storeroom for a few months.

Deep into the winter, when the skins have hardened and they have become very dry they are ready to eat. At the cooking school in Andalucía, after a relaxing lunch of chicken in almond sauce using almonds (harvested, dried, cracked and crushed by the cooking school!), you can enjoy a surprisingly juicy pomegranate as a refreshing dessert.

When you visit Andalucía for a Spanish cooking course in the autumn and winter months, you’ll learn to cook some incredible recipes using pomegranate fruits. For example, one of the most popular recipes is chicken or lamb in pomegranate sauce, which is a very healthy and fairly easy dish to prepare and yet it is oozing with sensual, aromatic and very complicated flavours.

Just a word of warning, please take care when you attempt to extract the juice or eat the fruit as it can get very messy. There is an art in handling the fruit, which Chef Clive will show you when you arrive in Andalucía!

If you would like to join Chef Clive for a Spanish cooking course to learn to cook some great Andalusian recipes, click on the links to find out more about short breaks and week-long cooking holidays that include visits to the sherry and olive oil producers for a complete culinary experience.